An Upset Odell Beckham Jr. Takes Off Cleats With 8 Minutes Left In Game, Talks Trash To Heckling Steelers Fans On The Sidelines During Blowout Loss 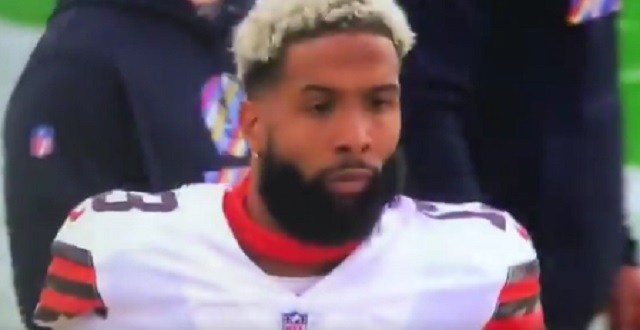 The Cleveland Browns had a rough day against the Steelers and Odell Beckham Jr. was in no mood take any crap from heckling fans.

As the Browns were getting blown out by the Steelers 38-7 on Sunday, an upset Beckham, who had already taken off his shoes with 8 minutes left in the game, could be seen jawing at fans on the sidelines.

OBJ with his shoes off, shoulder pads unbuckled and getting mad at a fan heckling him at Heinz Field with 8 min left is a microcosm of the Browns franchise.

Of course Beckham was criticized for his latest sideline antics.

Odell took his cleats and helmet off. What a bum! Same ole Browns!

This is the real OBJ always will be https://t.co/jwIfjUjJnM

Thanks for coming. We’ll reimburse you for mileage. Take a hike https://t.co/K0v0Tz7ZxD

OBJ quitting on his team with 8 minutes left is EXACTLY why we don't miss him in NY https://t.co/GTlwgiqAi5