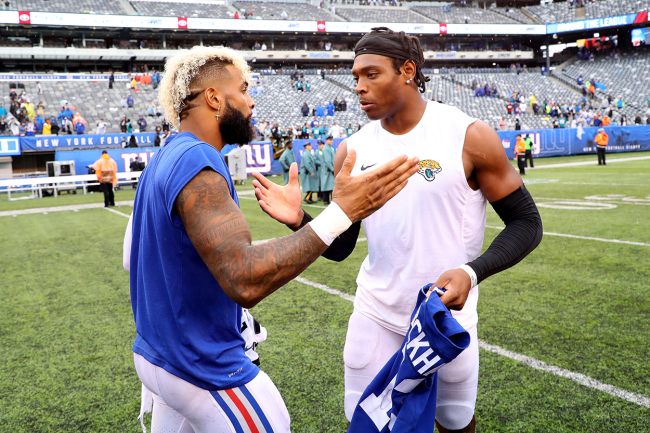 Odell Beckham Jr. is on his way to Los Angeles. It was announced that the 29-year-old, polarizing wide receiver agreed to terms with the Rams on Thursday afternoon and he will report to the team to undergo a physical and sign his contract today.

While rumors were flying around about his potential destinations, from Green Bay to New England, it was reportedly a recruiting battle from Beckham’s friends and confidantes across the league. Now, a day after his decision, NFL Network’s Peter Schrager (who is the absolute man) is reporting how Los Angeles became so prominently in the mix.

He dropped a hint last night, saying that veterans Von Miller — who has yet to even play a snap with the Rams — and Jalen Ramsey were at the forefront.

One thing I love— the two guys working the hardest all day to recruit and convince Odell to join the squad— Von Miller and Jalen Ramsey.

These Rams veterans are all in.

He told a story that he knew to be truth.

According to Schrager, Jalen Ramsey was the spearhead for getting Beckham out West. Ramsey reportedly was on FaceTime with Beckham in the team facilities throughout the day.

Beckham was showing some hesitation. He was concerned that the Rams’ receiver room had reached capacity.

So he asked Ramsey a question. Schrager said that Beckham said something along the lines of, “I don’t know, what do you think about the wide receiver room? Is there room for me?”

Ramsey, instead of just assuring Beckham himself, took matters into his own hands.

He walked into the wide receiver room, turned his iPhone camera to Robert Woods, Cooper Kupp, Van Jefferson, or whomever was in the area at the time. He asked them straight-up whether they would want Beckham to join the squad.

The answer, per Schrager, was a resounding yes. Beckham was sold, and the rest is history.