We Finally Know When Odell Beckham Jr. Will Be Cleared To Play And Everyone Wants Him On Their Team 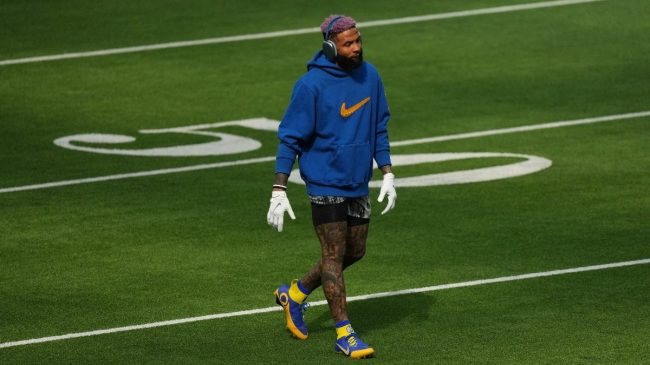 We’re officially midway through the 2022 NFL season and many playoff-caliber teams could use a wide receiver. Luckily for them, Odell Beckham Jr. may return from injury sooner, rather than later. For that reason, nearly everyone is making a case for him to sign with their favorite team.

According to Jay Glazer, Beckham’s “rehabbing [is] going so well he’s expected to be fully cleared in the next week.” There are a ton of players who have expressed interest in their team possibly signing the veteran wide receiver.

Big news for @obj rehabbing gong so well he’s expected to be fully cleared in the next week. Should be many suitors for his services. @NFLonFOX

It’s unclear exactly how well Odell Beckham Jr. will play once he returns. Knee injuries tend to heal differently depending on the player. Regardless, there will likely be plenty of interest for NFL teams to potentially sign him.

Fans are already chiming in with their two cents on where he should sign. Especially fans of teams who desperately could use a wide receiver. We’re looking at you Green Bay Packers.

Any chance Green Bay throws a bag at him?

Can’t wait to see you back home @obj pic.twitter.com/beMSJoCMkJ

This is especially true if Beckham is 100 percent healthy.

Kc would be nasty with him

Giving Dak Prescott another weapon wouldn’t be a bad idea.

You can never rule out Bill Belichick and the New England Patriots.

We’ll see how it all plays out. But make sure to keep tabs on Odell Beckham Jr. Rumors are sure to run rampant until an NFL team officially signs the star wide receiver.