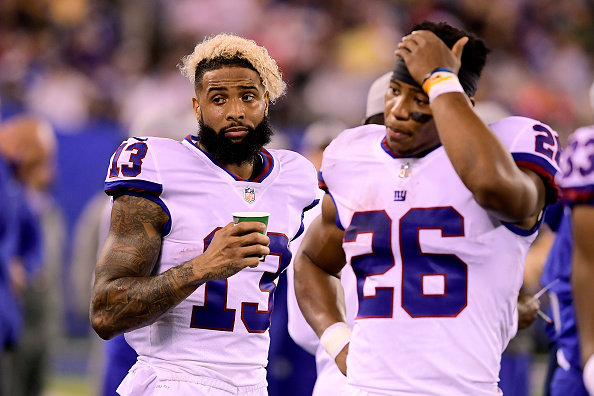 Odell Beckham has had hydration issues the past few weeks and has been forced to head into the locker room while the Giants were on the offense on a few occasions.

Odell Beckham Jr. leaves the field with two seconds left in the first half, while the rest of the #Giants offense stays on the field for one last snap. Beckham had two catches for 12 yards in the first half pic.twitter.com/KdQ7kTNWLf

Today, Odell spoke to the media and said the reason that he has a problem staying hydrated is because he “doesn’t like water”.

The Giants star has had a problem in two of the last three games where he has become dehydrated and headed into the locker room before the end of the first half.

“I really don’t like water,” Beckham said while holding a battle of water during his locker room interview. “I’m trying. I really just don’t like it. You know when you get that stomach feeling and it’s all slushy? I’m trying to stay hydrated. Sometimes, I just got to get an IV. It’s just necessary.”

Here’s the video of Odell saying he doesn’t like water.

Odell Beckham, Jr. is literally ME (in this one instance.)

Of course the Internet had jokes.

This is an all-time diva receiver comment. I can’t be on the field, because I need an IV, because I don’t like water. What’s next? “I had to sit out a series for the oxygen mask cuz I don’t like breathing” https://t.co/WlDHul4rmO

First it was LilWayneGate. Now we have WaterGate. #NYGiants pic.twitter.com/RadsG8eqzT

With water being 95% of the liquids entering my body, I can’t even fathom physically hearing “I don’t like water”

Personally, I'm not crazy about oxygen