NFL Fans React To Odell Beckham Jr. Speaking Out On His Lack Of Production This Season 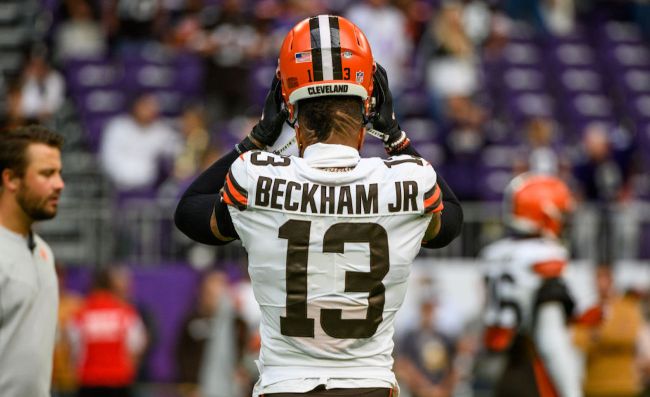 When the Cleveland Browns traded for Odell Beckham Jr. back in March of 2019, fans assumed that the then 26-year-old New York Giants star would be the perfect weapon to help exciting young quarterback Baker Mayfield grow. Two-plus years later, though, and Odell has failed to live up to expectations.

While Beckham’s Browns’ career got off to a respectable start — he hauled in 74 catches for 1,035 years and four touchdowns during his first season in Cleveland, the last two years have seen Beckham regress significantly below the levels fans know he can achieve.

During an injured-shortened 2020 season, Beckham caught 23 balls for 319 yards and three touchdowns, and this season, OBJ has just 9 catches for 124 yards and no touchdowns. For a 28-year-old in his prime with as much talent as Beckham, that’s simply not good enough, and he knows it.

Speaking to reporters on Thursday, Odell candidly addressed his lack of production thus far this year, saying he “feels like a shooter” a la James Harden in the NBA, in the sense that he feels his job is to attract attention and get other teammates open.

“I can’t sit here and lie like I don’t want the ball,” Beckham said. “I know I bring a lot of attention to defenses on the other end and other people are going to be open. You just have to live with that.”

“There will be days where it is my day. It is what it is at this point. Like I said, my main focus was to be healthy, to be able to stay healthy, get through a season.”

Odell’s quotes only added fuel to the fire that he should seek a trade from the Browns:

There’s no explanation for it.

Baker can get the ball to Rashard Higgins with no issues but can’t find Odell when he’s wide open. https://t.co/lACqa9aYsP

If in Odell Beckham, I walk in the GM office and say get me the fuck outta here https://t.co/w61jP6akc9

Thank god Odell finally said something about not getting targets. It’s worse than Carr with Ruggs. No great qb in history could not get it to their best player.

Odell should come to the ravens

Bring Odell back to the swamp @Saints

Odell needs to be traded

another week of the Browns using Odell to draw coverage away from a WR that’s less of a threat.

The 3-2 Browns will look to stay in the thick of the NFC North race on Sunday when they take on the undefeated Arizona Cardinals in Cleveland. Knowing Odell Beckham Jr., it certainly wouldn’t be surprising if he winds up having a massive game.