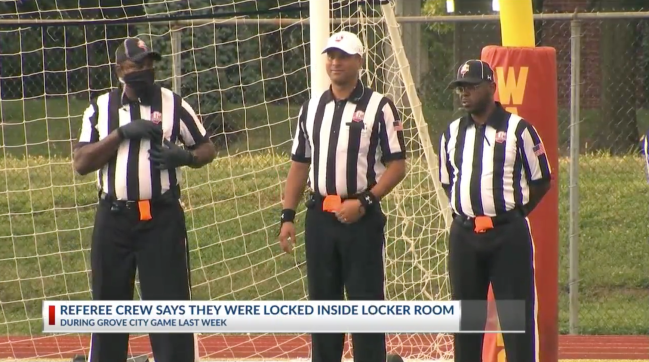 A group of referees in Ohio have filed charges against Grove City High School after being trapped inside a locker room over the weekend. The crew believes that the act was intentional and came in retribution for a call earlier in the season.

Here’s what we know so far:

Keith Dalton and his team, who are registered with the Central Ohio Football Association, were officiating a game between Grove City and Central Crossing on Sept. 10. They became stuck afterward.

During the game, Dalton called a penalty on Grove City. It is unclear as to what the call was, but the coaching staff disagreed with the flag and an assistant coach came onto the field.

He berated the officiating crew and was flagged for unsportsmanlike conduct after leaving the sideline. That coach was later suspended one game for his actions.

Grove City, which is currently 0-4, ended up losing that game. It was their third loss of the season and came by a score of 19-14.

Though the Greyhounds are not very good, that was a winnable game for the program. Thus, the loss was incredibly disappointing.

After the game, Dalton said that he and his team were inside the locker room being evaluated on their performance. It was at that point that a vending machine was placed outside of the door and barricaded the officiating crew inside.

“And we had to push on the door, three of us, to at least get the door wedged so we can get out,” said Dalton to WCMH NBC4. “We as a group have now filed charges against Grove City.”

In response to the allegations, the South-Western City School District (of which Grove City falls under) has engaged local police to open a formal investigation. Meanwhile, both the principal and head coach of Grove City have issued apologies.

As more details come out regarding this bizarre incident, stay tuned for updates.