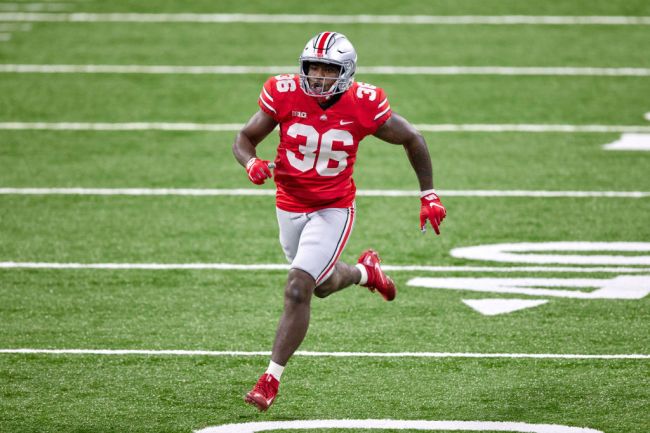 While the team was beating down Akron, Buckeyes’ linebacker K’Vaughan Pope tried to get into the game in the second quarter but was told to stay on the sideline. A frustrated Pope stormed into the locker room before an Ohio State staffer brought him back.

I think K'Vaughan Pope just quit the team in the middle of the game.

Pope tried to run out on the field in a sub package. Teradja Mitchell waved him off, and Pope stormed down the sideline, started walking to the tunnel and then had to be coaxed back by an Ohio State staffer. He tossed his gloves into the stands and took off his jersey.

Pope was then sent back into the locker room by his coaches which seems to have made him even angrier.

He has now been told to leave the Ohio State sideline and C.J. Barnett is taking him to the locker room. This is absolutely wild.

After trying to run out on the field in a substitution package in the second quarter on Saturday night against Akron, the senior linebacker was waved off by teammate Teradja Mitchell. Once getting back to the sideline, a visibly upset Pope started walking down the sideline by himself and was heading back to the locker room on his own.

Eventually he was corralled by Buckeyes staffer C.J. Barnett in the south end zone, and Pope was guided back to the sideline. Once there, though, Pope took off his gloves and threw them into the stands and began removing his Ohio State jersey — which apparently caught the attention of coach Ryan Day. After another conversation with multiple staffers, Pope was then led to the locker room while the game was ongoing.

While inside the locker room, Pope jumped on Twitter and posted “fuck Ohio State.”

good lucc to my teammates 💯

Welp, based on the tweets from K'Vaughan Pope, I think we can safely assume his career at Ohio State is over.