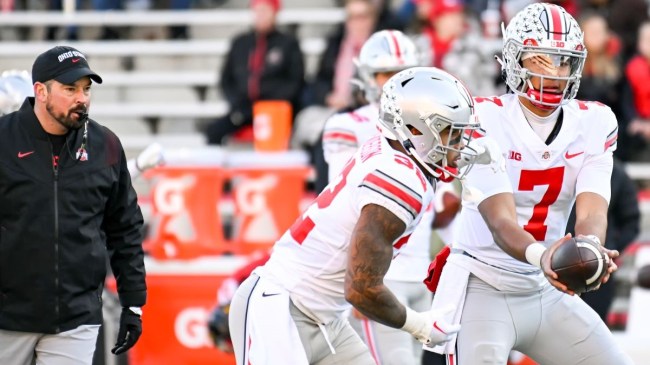 The Ohio State Buckeyes and Michigan Wolverines are set to play in the 118th edition of “The Game” on Saturday and it’s perhaps the biggest meeting between the two in a number of years.

Last season, the Wolverines picked up their first in over the Buckeyes in a decade and went on to win their first Big Ten championship under Jim Harbaugh. This year, the stakes are somehow even higher.

Both teams enter the contest undefeated. Ohio State comes in at 11-0 and ranked second in the College Football Playoff rankings behind Georgia after surviving a scare at Maryland a week ago. Michigan is also 11-0 and also faced a near upset a week ago, narrowly downing Illinois, 19-17.

Now both teams prepare for combat in their biggest games of the season. It’s also the final game of the regular season. The winner is very likely headed to the College Football Playoff. While the loser could be on the outside looking in without some help.

But neither team comes into the contest healthy.

The Buckeyes have been without superstar wide receiver Jaxon Smith-Njigba due to a hamstring injury for most of the season, Smith-Njigba is once again out against the Wolverines. Ohio State has also dealt with a slew of injuries at the running back position. Star sophomore TreVeyon Henderson will miss the showdown, while Miyan Williams is reportedly set to return.

Ohio State TB TreVeyon Henderson and WR Jaxon Smith-Njigba both listed as unavailable for today’s game against Michigan. Running back Miyan Williams not listed on the injury report, so he is available.

SOURCES: Michigan star RB Blake Corum is expected to try and play today but likely will be limited with how dynamic he is (knee); TE Luke Schoonmaker, UM’s second-leader receiver, is good to go; Donovan Edwards; WR AJ Henning and OG Trevor Keegan are also expected to return.

Ohio State enters the game as an 8-point favorite according to Caesars Sportsbook. The Wolverines will likely need all hands on deck to pull the upset. Now it appears head coach Jim Harbaugh will have just that.