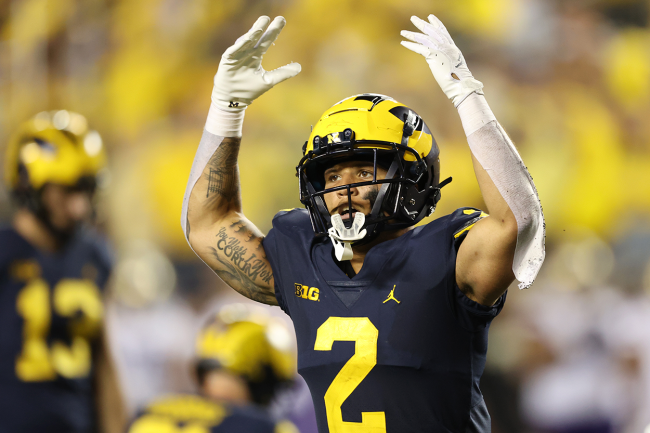 For the last 114 (and some change) years, the National Collegiate Athletic Association did not allow student-athletes (an antiquated term) to profit from their own names, images, and likenesses. Now, after that ruling was overturned in July, athletes likeo Blake Corum are using their NIL for a great cause.

Corum, a sophomore running back at Michigan, used his day off to give back. Ahead of Saturday’s game against Ohio State and Thanksgiving, he is helping families enjoy their holiday.

Just over a month ago, Corum made a decision. He wanted to buy 100 turkeys with the money he has made from NIL.

Supply chain issues have led to a massive rise in turkey costs ahead of the holiday. It has left some families unable to afford the traditional bird.

Corum wanted to do something about it.

“I’ve always given back, whether it’s a football camp or small things,” he said to the Detroit News. “I’ve always invested in giving back to my community and trying to get the next generation to live out their dreams. Thanksgiving was coming along, NIL is going really good, and I told my Dad (James), ‘I’m going to buy 100 turkeys.’”

After purchasing the birds, Corum held the “Giving Back 2 Give Thanks” even on Sunday. With the help from local charity groups, he was able to double the number of turkeys distributed and also included milk, mashed potatoes, macaroni and cheese, and other canned goods.

Corum and his teammate Nikhai Hill-Green were among those who distributed meals in the Ypsilanti community.

Michigan running back Blake Corum used his NIL money to purchase turkeys distributed today in two Ypsilanti communities in what he calls “Giving Back 2 Give Thanks” pic.twitter.com/bXSPKagiUS

Corum has at least two deals for NIL. He partnered with Yoke Gaming on Day 1 of the new regulation and has since signed signed with Outback Steakhouse.

Yoke Gaming is an app that allows fans to play video games with college athletes. His agreement with Outback celebrates the good that comes with being a teamMATE in both sports and in the community.

There is no denying that Corum is playing a large role in the Michigan community. His turkey giveaway on Sunday was an incredible way of giving back and it was his own brainchild from start to finish, which makes it even better.