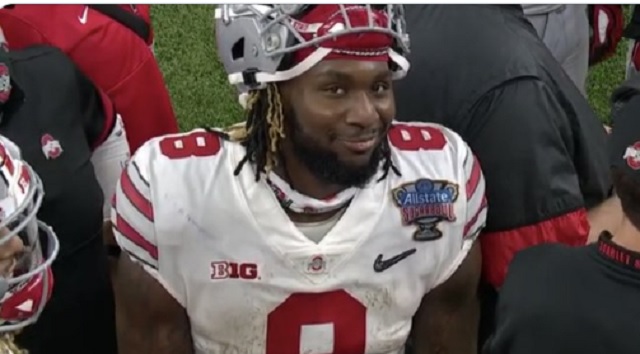 Ohio State destroyed Clemson on Saturday night and Buckeyes running back Trey Sermon become an Internet star in the process.

In the third quarter of the game Sermon broke loose for a long TD after a catch on third down despite looking like he went down on the play. Officials initially scored it a touchdown but then reversed the call on replay.

Was Trey Sermon down, or is this a Touchdown?@OhioStateFB | #GoBuckspic.twitter.com/YsRglIGqc6

During the replay review, a guilty Sermon deadpanned smiled into the camera which led to him becoming a meme .

When you send the “u up?” text and three dots start typing right away 😏pic.twitter.com/mn0kQTylFV

Me looking at god: pic.twitter.com/drX2MCGefo

Trey Sermon looking at the camera like Jim Halpert. pic.twitter.com/YRzr8VqMen

Trey Sermon is my 2021 mood pic.twitter.com/STrijx9BN8

Me, waking up in 2021 knowing that nothing is truly different but soaking up those good vibes: https://t.co/4rbET21MjT

When you text someone in the same room as you https://t.co/8giWAqL0qG

When you frame your sibling and they get the hell beat outta them and your guilty ass is just looking at them like: https://t.co/uyjxSZUgKM