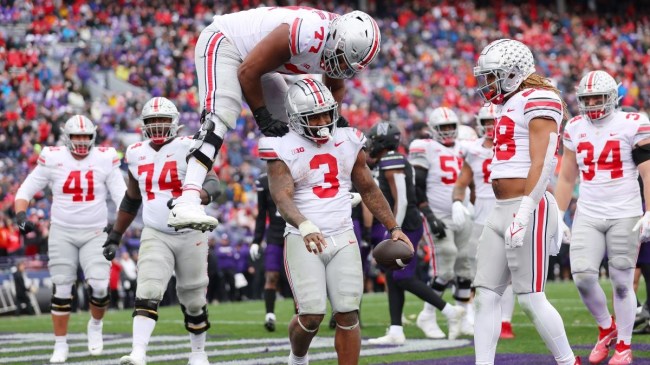 The Ohio State Buckeyes entered the college football season as one of the popular picks to win a national championship. To this point, that pick looks pretty darn good. The Buckeyes are 9-0 and sit second in the latest College Football Playoff rankings. Only their upcoming rivalry game against Michigan likely stands in the way of another playoff appearance.

While the Ohio State defense is much improved, it’s on offense where the Buckeyes have made their name. Star quarterback C.J. Stoud has been one of the best players in the nation yet again. Marvin Harrison Jr. has announced himself as one of the nation’s best wide receivers, and the Bucks are tops in the nation in scoring at 45.8 points per game.

But it hasn’t always been as easy as the numbers indicate. That’s because Ohio State has dealt with a slew of injuries to key cogs on the offense throughout the season. Superstar wideout Jaxon Smith-Njigba has dealt with a hamstring injury all season that has limited him to just three games and five receptions. Star sophomore running back TreVeyon Henderson has appeared in seven games but has been far from 100 percent for many of those.

Now it appears Ohio State looks set to add yet another big name to the growing list of injuries.

Miyan Williams throws up the O-H and gives a thumbs up as he is carted off the field due to injury pic.twitter.com/dj7vuOLgIW

Junior running back Miyan Williams has starred in the absence of Henderson. He’s carried the ball 102 times for 636 yards and 12 touchdowns prior to Saturday’s game against the Indiana Hoosiers. Williams then racked up another 147 yards and a touchdown on just 15 carries in the first half against the Hoosiers.

But that’s where his day would end. The 5-foot-9, 225-pound bruiser had to be carted off after an apparent ankle injury and could not put any weight on it.

Buckeyes fans are hoping for the best but seem to be fearing the worst.

Yea szn is probably over for him unfortunately https://t.co/NjvOnwi2gX

Man I hope this isn’t the worst. https://t.co/ZY4nZUHCRB

The Buckeyes face the third-ranked Wolverines in just two weeks and could be without both Henderson and Williams for the all-important showdown.