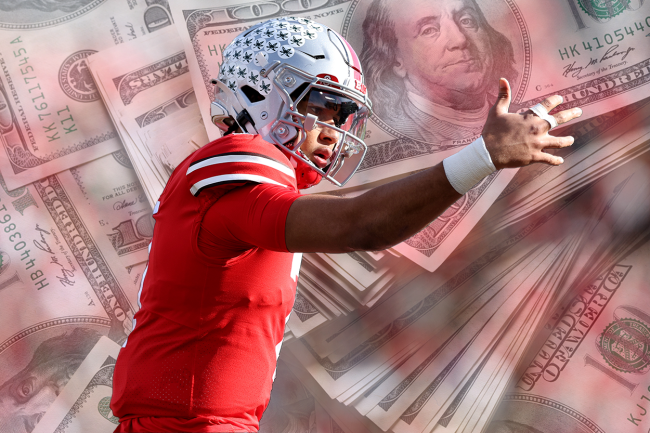 C.J. Stroud finished his sophomore year as a Heisman Trophy finalist and there is a lot of buzz around his success in 2022. The Ohio State quarterback is a likely Heisman contender and a potential top-10 pick in the 2023 NFL Draft if all things go according to plan.

As a result, his value in terms of Name, Image and Likeness is amongst the greatest in the country. He is QB1 at one of the highest-profile schools in the country and is a very good one at that.

In turn, Stroud has been able to cash-in and his most recent deal is rather lucrative. He isn’t getting paid in terms of a check, but it’ll be hard to miss the benefits that he is reaping from the deal.

As first reported by Joey Kaufman with The Columbus Dispatch, Stroud has entered into a NIL deal with Sarchione Auto Gallery, a car dealership located about two hours from Ohio State in Canton, Ohio. He’s getting a new (pre-owned) whip and it’s rather luxurious.

By signing the deal, Stroud will promote the dealership on social media and with public appearances at the gallery. In turn, he received a Mercedes G-Wagon.

Initially, Stroud was going to drive a $150,000 Bentley, but he changed his mind upon arrival at the dealership. The G-Wagon is valued at $200,000, so Stroud will be driving in style.

Here are a few looks at his new SUV:

Stroud has an On3 NIL Valuation of 2.4M and ranks 6th on the NIL 100💰https://t.co/BXQT2NDjGk pic.twitter.com/jzBHMnllWJ

Ohio State QB CJ Stroud has signed an NIL deal with Sarchione Auto Gallery, not for a $150,000 Bentley Bentayga…

The car was a “game-day decision”, and he can swap out vehicles every 45 days. pic.twitter.com/Z62T0euEX3

As part of Stroud’s deal, he will be driving multiple luxury whips this fall. The agreement allows him to swap cars every 45-60 days, so he could get his Bentley next if he wanted.

Stroud was reportedly contacted by other dealerships about a potential deal, but he wanted to drive a luxury vehicle and Athletes First, the agency that represents the OSU quarterback, reached out to Sarchione Auto Gallery.

From there, it was easy.

“When you talk to people, whether it’s in the community or at the game, our brand awareness is what we’re building,” said Ryan Burton, the general manager of Sarchione Auto Gallery said to The Columbus Dispatch. “So when you have the best-of-the-best promoting your brand, it only does good things.”

Once Stroud’s camp reached out, it was a no-brainer.

“If somebody is that adamant about it, and they’re going to be a Heisman frontrunner, top-10 pick in the draft, we’re interested,” Burton said. “That’s how it all came together.”

Look for Stroud on the streets of Columbus this fall. He’ll be hard to miss.