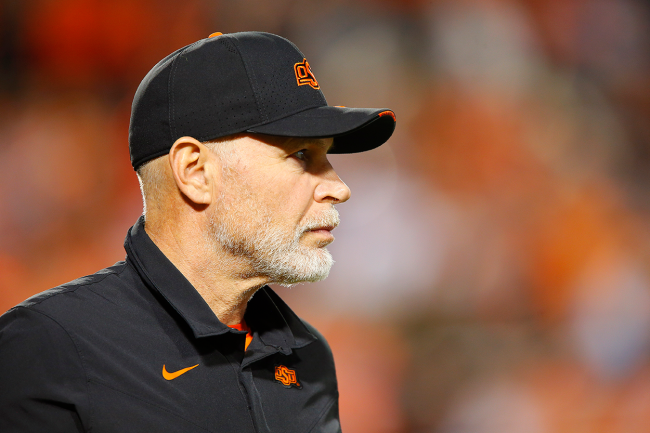 Jim Knowles has been in coaching since 1988. Despite all of his career moves around the country, nothing has really changed for him from school to school.

Knowles, who recently became the defensive coordinator at Ohio State, had a hilarious explanation of how he likes Columbus.

Since he began his career as the defensive line coach at Cornell in 1988, Knowles has spent time at Western Michigan, Ole Miss and Duke. Most recently, he served as the Defensive Coordinator at Oklahoma State from 2018-2021.

The 56-year-old took over the Buckeyes on December 7th and just started his first spring practice with the team. During his first post-practice interview, Knowles was asked how he likes his new city compared to his time in Oklahoma.

In response, he gave the ultimate football guy answer. Knowles isn’t concerned about the city in which he lives, because coaching takes up all of his time.

And when he isn’t coaching, he’s smoking a cigar. That’s it. Plain and simple.

Jim Knowles is the ultimate #FootballGuy. Here was his answer on how he's liking Columbus after 4 years "on the plains" at Oklahoma State.

"It's just football, smoke a cigar every now . . . You kind of have blinders on but I do like the city whenever I get out of here." pic.twitter.com/8KcMjxS7hs

Knowles is in his fourth month as Ohio State’s new defensive coordinator after turning the Oklahoma State defense into one of the best in the nation. He is the highest-paid assistant coach in Buckeyes program history and will make an average of $1.9 million per year. That’s a lot of cigars.