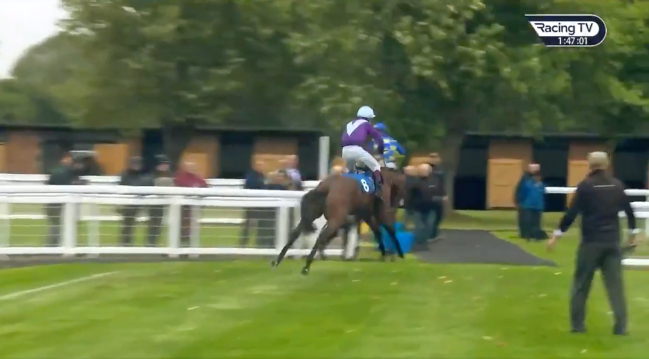 26-year-old Irish jockey Oisin Murphy had a terrifying moment before his race on Thursday. His two-year-old horse, Oasis Gift, decided to take off out of control and sent him head-first into a railing.

The incident took place at the Salisbury racetrack in the United Kingdom as Murphy and Oasis were getting ready for his debut in a seven-furlong event. Somehow, Murphy walked away fairly unscathed.

In the wild footage of what happened, it appears that Oasis got spooked. He tried to get away from whatever it was that triggered him and started bucking across the parade ring.

Murphy, who is saddled on top, tried his best to hold on. Ultimately, he could not and the jockey was thrown from the horse, directly into the rail.

🚨 Breaking news: Champion jockey @oismurphy is receiving medical treatment after this dramatic incident in the paddock at Salisbury

Our best wishes to Oisin & we will bring you more news as we get it pic.twitter.com/jh7X01dLqi

What’s crazy is that Murphy is no amateur, he is a two-time British flat racing champion. It was just a freak incident that didn’t go his way.

🗣 “@oismurphy walked slowly into the emergency ambulance.”@LydiaHislop & @jrmillman discuss the dramatic scenes at Salisbury – wishing Oisin all the best 🤞 pic.twitter.com/WTC5ZtjLah

Fortunately, the injuries were minimal.

Murphy was transported to the NHS London hospital after the crash and somehow, he only ended up with a few cuts to the face.

Thanks to all the medical staff @salisburyraces + the hospital @NHSEnglandLDN I’ve had a few stitches to my lip + face. I’ve been discharged already. Very grateful to their work and all the kind messages.

While the medical team attended to Murphy, Oasis was caught and unharmed. He was forced to withdraw from the race.

When it comes to a timetable for Murphy’s return, it won’t be long. He plans to ride Japanese thoroughbred racehorse, Chrono Genesis, in Sunday’s Prix de l’Arc de Triomphe.