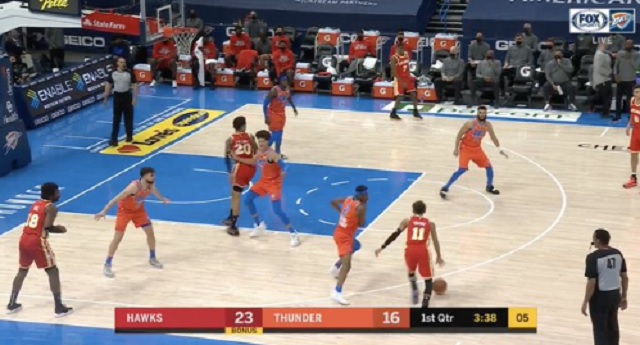 The OKC Thunder-Atlanta Hawks game on Friday had a jersey snafu that left viewers at home scratching their heads.

During the game, viewers complained that they couldn’t tell the teams apart because they were both wearing similar colored jerseys.

who thought this was a good idea…? pic.twitter.com/AfROQpw4qS

Just now able to sit down and watch the game….

Whose idea was this? pic.twitter.com/hrxQIUab39

But who approved these jersey colors? 🤔

The Thunder eventually were forced to change their jerseys due to all the confusion.

The Thunder will be switching to white uniforms in the second half, per a team spokesman. The orange/red matchup wasn’t supposed to happen.

Atlanta only has one uniform on the road, so OKC will change.

Update: OKC blamed the Hawks for wearing the wrong jersey color for the game.

From Thunder: “The Hawks are wearing the incorrect uniform color for the game. The league process of inputting uniform colors should have caught the orange/red combo, but because the Hawks only have red uniforms on the trip the Thunder will switch to white at the half.”