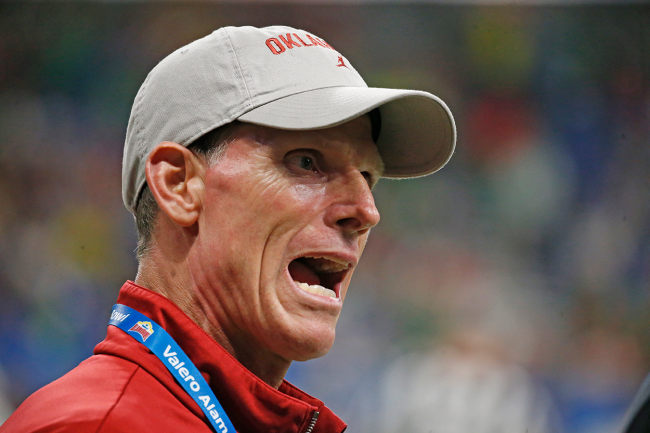 Shortly after Lincoln Riley left Oklahoma for USC, the Sooners hired Brent Venables as his replacement. Since then, there has been a clear shift in energy.

Venables is a defensive-minded coach who played linebacker during his collegiate days and attacks every moment with unrelenting passion and excitement. The 51-year-old is absolutely fired up to the max at all times, as was seen during spring practice last week.

One of the players on the field during spring ball is Hawaii transfer Jonah Laulu. The 6-foot-6, 280-pound defensive lineman committed to Oklahoma over offers from Georgia and others.

Laulu adds a massive piece to Venables’ new-look defense and will be a crucial part of the Sooners’ success in the fall. To get him on campus, of course, took some recruiting.

During the process, Laulu took a FaceTime phone call to discuss Oklahoma with Venables. While on the call, Venables was in the gym getting a lift in.

According to Laulu, Venables did not stop lifting to take the call. He continued to pump iron as he talked to the massive Hawaii transfer who he hoped to land from the portal.

At first, Laulu thought it was kind of weird that Venables was doing literal curls on the call. And then he realized that is just how he is all of the time. He loved it.

Here is how Jonah Laulu explained his call with Oklahoma and Venables:

Interestingly enough, this was not the first time that Venables lifted during a call or visit. Back in January, not long after he landed a commitment from Laulu, he stopped by a high school and did pull-ups in the weight room while wearing a button down.

Venables is always jacked out of his mind and is not going to let anyone stop him from doing what he wants to do. That’s part of what makes him him and it’s part of why players love to play for him.