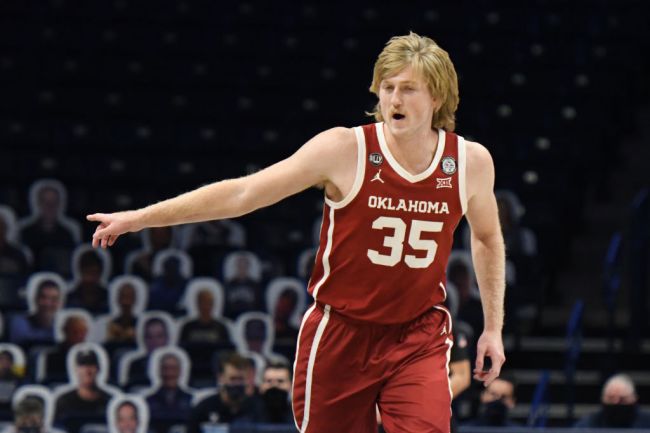 Somebody at the North Carolina graphics department failed its newest superstar miserably on Friday. Former Oklahoma stretch forward Brady Manek committed to the school and new head coach Hubert Davis as a graduate transfer on Friday and posted his decision with two incredibly blurry photos.

In the age of social media, cool images, graphics and announcements are all of the rage. Manek did not meet the mark. In some ways, it’s very on-brand for the 6-foot-9, 231-pound senior. He is considered by many to be the reincarnation of Larry Bird because of his glorious look and doesn’t seem like someone who is incredible well-tuned on social media.

Here is your daily Brady Manek update. His look is perfect in every way pic.twitter.com/gbaTsUuJgn

Manek committing to the Tar Heels is a huge get. The school hired assistant coach Hubert Davis as head coach to fill the opening left by Roy Williams, who retired earlier this month. He was very open about the need for UNC to evolve and improve, and to use the transfer portal to do so.

The team needed a stretch big man to help open up the offense for the 2021-22 roster and they found it in the former Sooner. He averaged 10.8 points and 5 rebounds this past year in Norman and has been a double-digit scorer in all four collegiate season and hit 235 career three-pointers with Oklahoma. His impact will be felt immediately as a perimeter shooter on a team that was unable to get out of the NCAA Tournament First Round in 2021.

Manek will have one year of college eligibility remaining and needs to prove that he can be more consistent, a better rebounder and a better passer. His jump shot could allow him to make an NBA team’s roster, but his social media presence could certainly use some work. He’s not off to a great start in Chapel Hill.