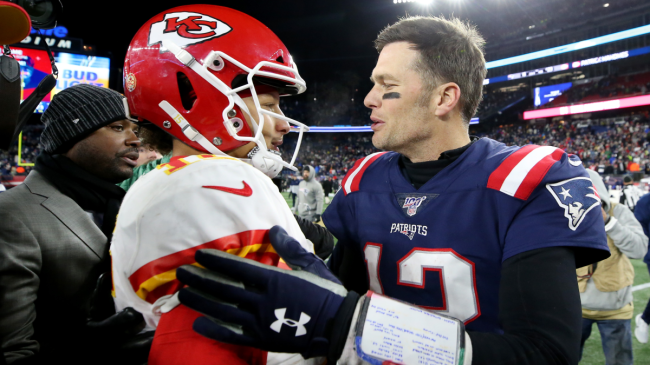 NFL fans are reacting to an odd Sunday Night Football promotion used to tease the upcoming showdown between Tom Brady and Patrick Mahomes.

Singer/songwriter Beck unveiled the release of a new song over the weekend, and the NFL decided it to be the perfect marketing idea to showcase the heavyweight matchup between the Chiefs and Bucs. After seeing the promo, though, many fans are having second thoughts.

Beck covered Neil Young’s “Old Man,” which was used to highlight the shift from old to new in the NFL. Tom Brady is playing what’s likely to be his final season after spending more than two decades on the gridiron. He will hand the keys over to a new generation of passers, with Patrick Mahomes being maybe the most talented in the bunch.

While it’s not hard to connect the dots on the league’s though process with the song pairing, the correlation just seems a bit off.

Honestly, I think most people immediately think of their dads when they listen to the song. In reality, Neil Young wrote the tune when he was 25, fresh off a divorce from his first wife. It’s about a much older caretaker of his Broken Arrow Ranch in California, highlighting love lost (which maybe Brady can relate to), life experiences, and the common yearnings among different generations.

Personally, I didn’t really see the connection, and I’m not the only one that thought it was a little weird for an NFL promo.

Fans react to ‘Old Man’ promo ahead of Brady-Mahomes matchup

NFL fans were quick to react to seeing the “Old Man” promo highlighting the Brady-Mahomes matchup. It didn’t exactly garner the response the league anticipated.

One fan said, “That commercial of Beck covering Neil Young for the Bucs vs Chiefs game was the icing on the cake for one of the worst football games I’ve ever watched.” The commercial wasn’t much better than a SNF contest that ended 11-10 between the Broncos and 49ers.

That commercial of Beck covering Neil Young for the Buccs vs Chiefs game was the icing on the cake for one of the worst football games I've ever watched pic.twitter.com/Q9PtrlsYkB

Another poster wrote, “This is so cringe.”

Love you @beck but wtf this is so cringe https://t.co/pkc1PTuwWn

This person commented on the odd promo saying, “Maybe it’s just because I like Beck so much and I like football so little, but this is weird, right?” Weird, indeed.

Maybe it’s just because I like Beck so much and I like football so little, but this is weird, right? https://t.co/QX08Vdkccz

Take a look at a few more confused reactions below.

this is psychedelically funny lmao https://t.co/UYQEw1UXaG