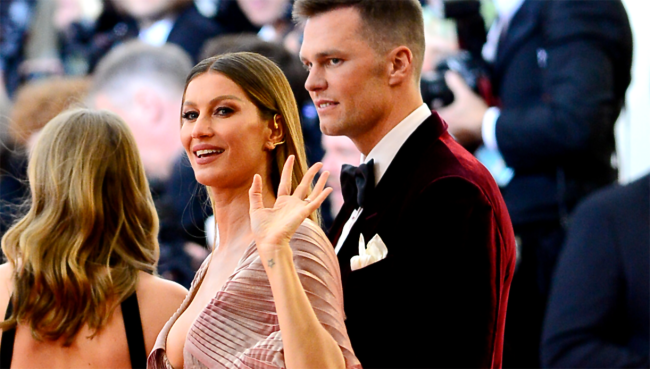 In a very interesting twist of timing, Gisele Bundchen is featured in the latest issue of Elle magazine.

Inside the magazine, Gisele discusses her “concerns” over her husband Tom Brady continuing to play football.

Brady and Gisele have been the talk of the tabloids ever since the Buccaneers quarterback abruptly took 11 days off in the middle of training camp to go to the Bahamas and hang out at a resort with his wife and family.

Since that day, reports have been flying claiming that Gisele and Brady are having serious marital issues.

There has been talk of a “epic fight” caused by his un-retirement, rumors that the couple has split and are currently not living together, and that it was Gisele who pressured Brady into originally announcing his retirement.

Neither Gisele nor Brady have made any public comments about the reports and rumors. Gisele did wish Tom well on Twitter prior to Sunday’s game.

Asked about the recent attention on his personal life, Brady said he’s used to it and “it’s been like that for a long time.”#gobucs #nflnetwork

On Tuesday, in the new Elle profile, Bundchen spoke about her husband continuing to play.

Although she and her husband have joked about his potential retirement for years, Bündchen is often depicted by the media as desperate for Brady to call it quits. I tell her the characterization seems sexist to me, and she agrees. “I think this is the system we’ve been living in. That’s what society has accepted and what society hasn’t accepted.” Ultimately, she wants him to be happy and she knows better than anyone how much he loves the sport. “Obviously, I have my concerns—this is a very violent sport, and I have my children and I would like him to be more present,” she says. “I have definitely had those conversations with him over and over again. But ultimately, I feel that everybody has to make a decision that works for [them]. He needs to follow his joy, too.”

Gisele was also asked to comment on the speculation about their being a rift between her and Tom over his coming back for another year of football, and she declined.

“I’ve done my part, which is [to] be there for [Tom],” she added. “I moved to Boston, and I focused on creating a cocoon and a loving environment for my children to grow up in and to be there supporting him and his dreams. Seeing my children succeed and become the beautiful little humans that they are, seeing him succeed, and being fulfilled in his career—it makes me happy. At this point in my life, I feel like I’ve done a good job on that.”

Interestingly, on the latest episode of his Let’s Go! podcast, Brady stated how important football and family has been to him.

“So in this day and age of with everything that’s going on is is perhaps the only time you can find any peace and quiet is when some 320 pound guys are chasing you on the field?” Brady’s co-host Jim Gray asked him.

“I hope that’s not the only place I find it because that’s a brutal way to go after a long period of time, to have that. But there is a simplicity to life when you’re in football season because there’s a rhythm to it,” Brady replied. “We play every week. It’s a pretty, the schedule’s pretty much set,
but you know I’m finding peace in other ways of life and just loving, you know, the time. My kids are getting a little bit older and and, uh, you know, football and family has always been the most important thing to me so it’s a good time of year.”