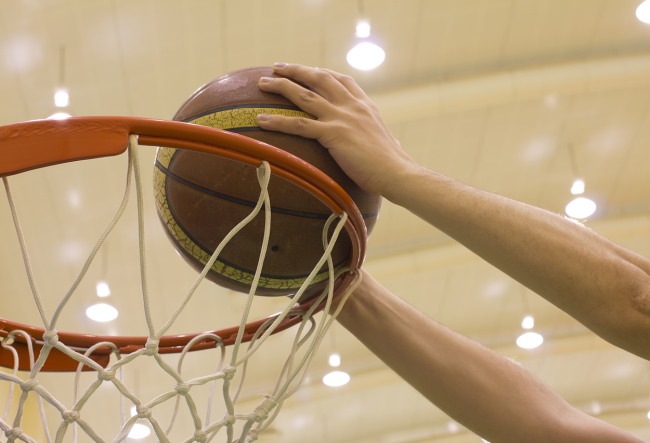 Olivier Rioux is significantly taller than the vast majority of people his age. Rioux stands seven feet, five inches tall and is only a sophomore in high school.

He was recently named the World’s Tallest Teenager by Guinness World Records and is on his way to becoming a basketball star. Rioux is currently hooping at a sports-focused prep school and is absolutely dominating everybody.

Olivier Rioux from Canada is the world's tallest teenager.

The 15-year-old Canada-native moved to the United States over the summer and enrolled at IMG Academy for the remainder of his high school career. He hopes to one day play in the NBA.

Here’s a guy to watch! That’s Olivier Rioux. He’s 16 and holds the @GWR for tallest teen! Ollie is 7’5 and a 1/2! He’s a basketball player at @IMGAcademy. He’s got two great coaches. Including former pro-player Daniel Santiago and Jeremy Schiller. @fox13news pic.twitter.com/mFOkxkNcmP

IMG is a preparatory boarding school and sports training destination in Bradenton, Florida and has produced quite a few high-profile recruits in recent years. Trevon Duval, Dwayne Bacon, Jonathan Isaac, and Anfernee Simons are among those to go on to a high-profile college program and eventually play professionally.

Rioux wants to be next.

Based on his first year with the Ascenders, there is real potential. Those who make the mistake of entering the paint while Rioux is in the game proceed to get viciously swatted out of the gym— over, and over, and over again.

7’5 sophomore Olivier Rioux is a dominant force inside for IMG! pic.twitter.com/WiBZDcjYSy

A day in the life of Rioux is not like those of his counterparts. Although the training is the same as his teammates, there is extra work to be done on his end.

When someone grows as fast as Rioux, there is a learning curve.

Although growing to be 7-foot-5 puts Rioux on a fast-track to a career in basketball, a lot of work has to be done to get to that point. In addition to the everyday inconveniences of things like finding clothes and fitting under doorframes, there are athletic hurdles.

With fast, massive growth also comes a loss of coordination and ability to move quickly. As a result, Rioux almost has to re-learn how to be an explosive athlete like he was when he was smaller.

In addition, he has to work twice as hard to put weight and muscle on his tall frame. So, while IMG and Rioux are thrilled about his potential as a basketball player, there is a lot of work to do.

In the meantime, Rioux is a force to be reckoned with when he is on the court. Do not challenge him on offense and there is no point in trying to contest his shot defensively.

Prior to his time with IMG, Rioux either trained or played with Real Madrid in Spain and College St-Jean-Vianney in Montreal, Quebec. He is currently finishing up his sophomore season at IMG.

Rioux is set to finish out his career in Florida before, hopefully, playing college basketball on the Division-I level. If he can play to his size, he will be a force to be reckoned with.