The Olympic Silver Medalist In Karate Landed A Vicious Head Kick KO But Was Disqualified From The Match, Lost Gold 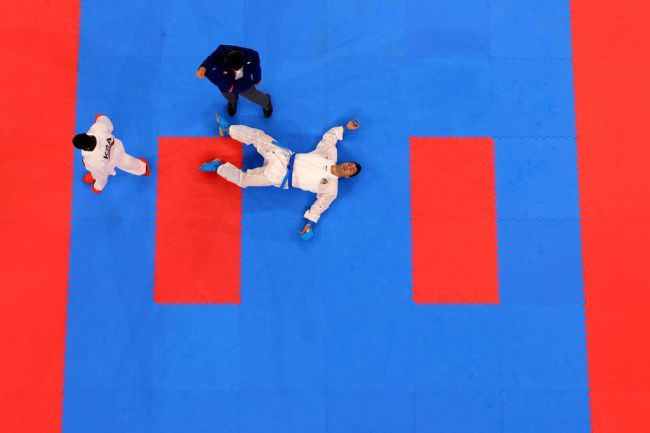 Saudi Arabia’s Tareg Hamedi should have been the first-ever Olympic gold medalist in the men’s over-7kg kumite karate competition. However, a nasty walk-off head kick knockout lost him the match in a way you might not expect.

Hamedi, an up-and-coming star in Karate, was facing Iran’s Sajad Ganjzadeh, an established champion, in the Tokyo 2020 final. It was the sport’s debut at the Games and the match was the last of the year.

With the final strike of the entire tournament, Hamedi landed a spectacular strike to walk it off— or so he thought.

His opponent moved in momentarily before stepping into a one-two combination that lightly made contact but did not fully land. On the counter, Hamedi casually leaned back on his right and threw a left-footed head kick forward.

It did fully land. Ganjzadeh was OUT like a light. Goodnight.

Hamedi did a celebratory hop and let out a ferocious scream after thinking he won the gold medal in his, and the sport’s, debut. And yet, somehow, someway, he did not.

The judges immediately conferred after the vicious knockout and disqualified the Saudi competitor. Hamedi was stunned and Ganjzadeh — the new gold medal champion — was still completely out.

Hamedi was disqualified for a hansoka, a very serious violation in karate. The decision was not initially explained but this is the gist:

Karatekas (one who competes in karate) are not supposed to follow through on their strikes in the Olympic version of karate, so Hamedi was relegated to second place on the podium. He left the mat in tears.

And get this: Ganjzadeh found out that he won the gold medal champion after being carted off of the floor and waking up backstage. He won the first-ever gold medal at the Olympics by being knocked tf out.

Hamedi’s silver medal was still only the second-ever won by Saudi Arabia and he hugged Ganjzadeh on the podium in a great display of sportsmanship. Even though we all know that her really won gold.