One NFL Head Coach Reportedly Lost His Team After Week 1 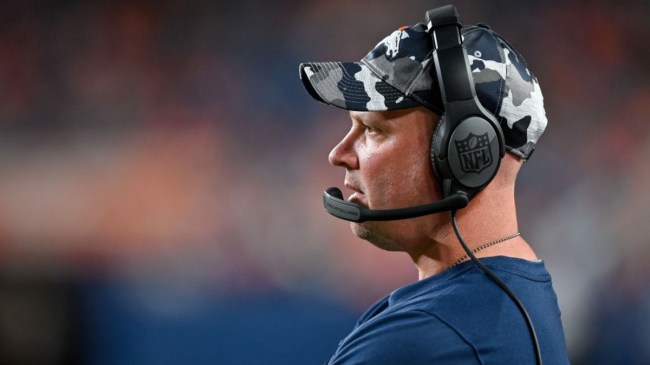 The news just keeps getting worse for the Denver Broncos.

There are very few teams around the league that have been nearly as disappointing as the Broncos so far this season as they have gone from a team that was expected to make a playoff run to a team that has struggled to win. To make matters worse, those struggles have mostly occurred in primetime.

As they sit with a 2-5 record, there have been growing rumors about key players from their roster being traded and there have even been reports that head coach Nathaniel Hackett could be coaching for his job this weekend.

It’s a pretty bleak situation for the Broncos and today a report revealed just how bad things are in Denver.

Fox Sports’ Chris Broussard revealed that some ex-NFL players have told him that Hackett lost the team when he made the decision to kick the long field goal in Week 1 instead of putting the ball in Russell Wilson’s hands.

"I've had ex-NFL players tell me that Nathaniel Hackett lost the team after the Broncos first game."

— @Chris_Broussard on report that Nathaniel Hackett’s job could be on the line vs Jaguars: pic.twitter.com/q7fDUoCgWf

i could definitely see how deciding to try a very improbable field goal instead of trusting your new franchise quarterback wouldn’t sit particularly well with your locker room.

It’s looking more and more likely each week that Nathaniel Hackett won’t even make it through his first season as an NFL head coach. It’s a tough situation to be in as the team’s struggles are not entirely his fault with a pair of goal-line fumbles costing them points in that Week 1 loss and Russell Wilson basically giving away the game against the coach.

Still, there isn’t much a coach can do once they start to lose the locker room.