One Of College Football’s Best Names Is Reportedly Transferring 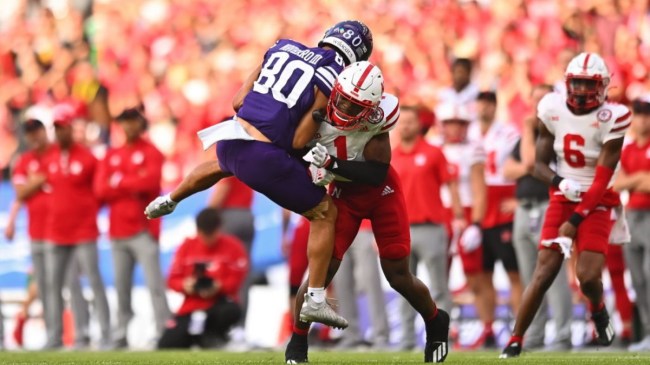 Decoldest Crawford hasn’t made much of an impact at the college level yet, but he’s still a name that many college football fans are familiar with. With a name like that, how could he not be?

Crawford was a highly sought after recruit in the 2022 class, receiving offers from LSU, Arizona State, Washington, USC, Ole Miss, and a number of other strong programs. He initially committed to LSU, but would change his mind and end up playing at Nebraska.

Before he ever took a snap for the Cornhuskers, Crawford had already signed an awesomely fitting NIL deal with a heating and cooling company.

Unfortunately, that NIL deal was really the last we’ve heard about Crawford, who had no stats in his first season with the Cornhuskers.

Now it appears that he is ready to move on from Nebraska and try to find a program that will offer him more playing time as On3 Sports’ Matt Zenitz has reported that Decoldest is entering the transfer portal.

This decision comes during a time of a lot of change at Nebraska. After firing Scott Frost early in the year and putting Mickey Joseph in charge for most of the season, the Cornhuskers wasted no time finding their next head coach at the end of their season.

The school hired Matt Rhule to take the reigns for the program and Rhule has some experience getting receivers to the NFL. He coached Keith Kirkwood and Robbie Anderson at Temple and coached Denzel Mims, Jalen Hurd, and Tyquan Thornton at Baylor.

It seems that’s enough to convince Decoldest to stick around to play for the new Nebraska coach and he will instead try his luck elsewhere for his 2nd college season.