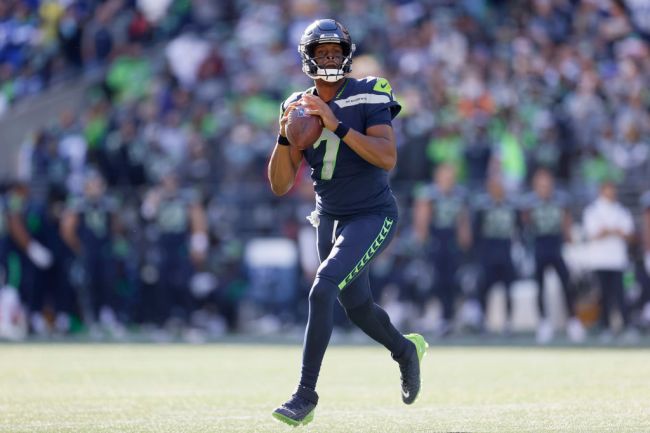 With teams around the NFL beginning training camp this week, football fans are going to learn a lot about where the league’s most contentious quarterback battles stand.

While some of those QB competitions are believed to already be settled, the competition for the Seattle Seahawks was expected to be one of the most tightly contested ones in the league.

On day 1 of camp, it seems like there might already be one QB who is way ahead. According to ESPN’s Brady Henderson, Geno Smith dominated 1st team reps today before Drew Lock took some reps late in the day and didn’t exactly impress during his reps.

Seahawks practice is over. Geno Smith continued to get the vast majority of the No. 1 reps, as was the case during the offseason program. Drew Lock got some first-team reps late in practice. Ended it with an ill-advised deep throw back across his body that fell incomplete.

It’s throws like the one that ended his day that are likely the reason Lock hasn’t been able to lay claim to the starting job for the Seattle Seahawks. Lock has a history of questionable decision-making on the field, as evidenced by the 21 interceptions he has thrown in just 21 career starts.

Smith had been seen as having a leg up for the QB 1 spot for the Seahawks throughout the offseason, but it seemed likely that Lock would take over once he had more time getting used to the Seahawks’ offense. Now it appears like he could lose another QB competition this season.

That would be a very disappointing result for both Lock and the Seahawks after Lock was part of the return in the Russell Wilson trade. This season likely represents Lock’s last chance to prove he should be an NFL starter and it doesn’t sound like he’s done a great job o taking advantage of the opportunity so far this offseason.