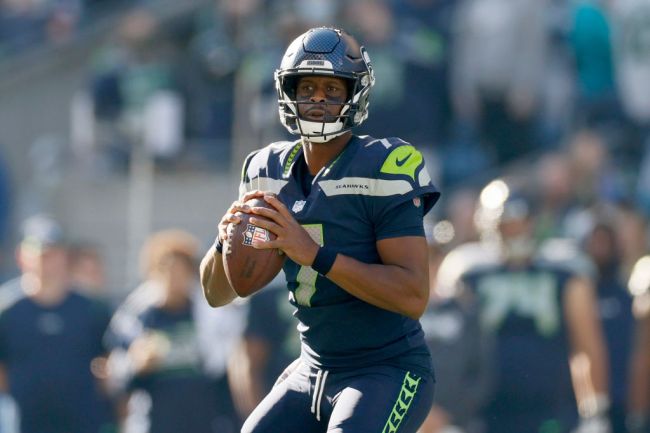 The Seattle Seahawks don’t appear like they plan on heading into the 2022 NFL season with much to work with at the quarterback position. After trading Russell Wilson, they are left with Drew Lock and Geno Smith as their starting options and they haven’t shown much interest in acquiring any other options.

It has left fans wondering which of the disappointing former second round picks would be picked to start for the team. Today, the Seahawks’ offensive coordinator talked to 93.3 KJR radio about the team’s offense and revealed which QB currently has the edge. According to OC Shane Waldron, Geno Smith is currently ahead because of his familiarity with the offense.

Seahawks OC Shane Waldron on @933KJR:
*Geno Smith has had an early edge over Drew Lock to replace Russell Wilson because of familiarity

*Getting DK Metcalf the ball is a priority

*Damien Lewis, Phil Haynes will stay focused on guard, not much center https://t.co/cgKVNdz0mR

“Right now, Geno has done such a good job of carrying over (the offensive principles from 2021). He already had a head start over Drew right there,” Waldron said. “We have a long time to go. We are just in T-shirts and shorts right now, going against air. We have a long way to go to see where this competition (goes).”

It isn’t exactly a ringing endorsement of Smith, but it could be just enough for him to get the job. Drew Lock hasn’t exactly proven to be a reliable starter in the NFL and while Smith hasn’t either, the Seahawks could decide they’re just better off with the player more comfortable in the offense.

With all of the offensive talent available to the Seahawks, it’s going to feel like it has been wasted regardless of which of these men is throwing them the football.