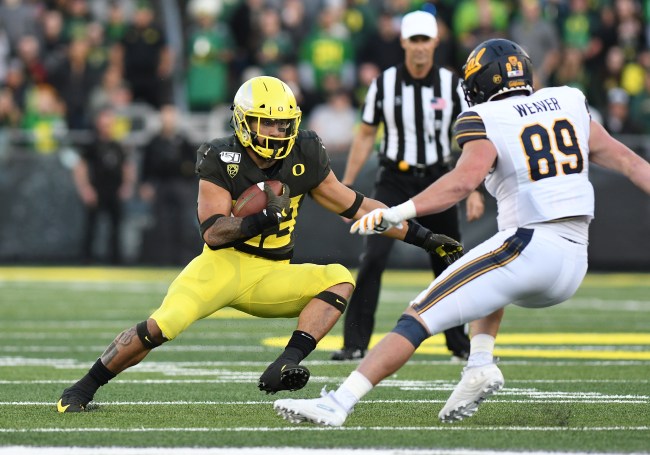 In the middle of tonight’s Oregon-Cal game, an Oregon fan decided it was a good idea to rush the field but thinks didn’t end well for him.

A clown fan ran onto the field during a timeout and after gaining about 75 yards and juking a few security personnel, UO RB Cyrus Habibi-Likio snuck up from behind to take him down. Not sure the UO coaching staff appreciated his efforts. But, the fans sure did. Loud applause.

Defensive play of the game from Cyrus. pic.twitter.com/OVFZg8DN4j

A fan got on the field during the Oregon game and got absolutely crushed by Cyrus Habibi-Likio. 😂🤣 (via @lisacatto, @KellieWelsh92) pic.twitter.com/aZ3jCEh5sc

Not only did Hanibi_Likio lay out the fan but he also ran for a touchdown a few minutes later.

The Ducks took it all the way to the end of the 3rd Quarter, as Cyrus Habibi-Likio takes one to grab the lead over Cal!pic.twitter.com/TfeMT6ONLP