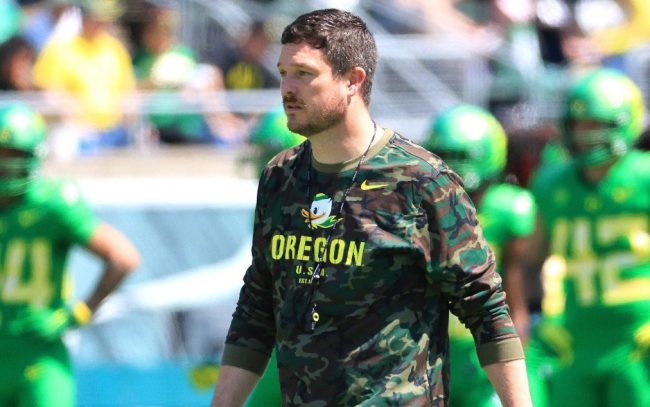 All eyes have been on the Pac-12 lately after USC and UCLA opted to leave for the Big Ten. However, both programs won’t be leaving until 2024. This move from both schools has caused their current conference a major headache as many worry it will negatively impact the remainder of the teams. Even so, it sounds like the Oregon Ducks are the ones dominating recruiting.

According to Unnecessary Roughness, four-star defensive lineman Terrance Green has committed to Oregon. He’s joining an amazing class, as the Ducks are now ranked 14th in the nation in recruiting. Although the Pac-12 is scrambling to remain relevant, the Ducks are ensuring they’ll be a force to be reckoned with for years to come.

The top 300 recruit will be apart of an Oregon class that ranks 14th on @On3Recruits rankings. pic.twitter.com/8yHC3Js1vR

You would think that USC and UCLA would have picked up momentum in recruiting after announcing their conference change. Instead, neither of them is doing all that well, as they come in at ninth and tenth in the Pac-12 recruiting race, per 247 Sports. USC has acquired just 10 commits while UCLA has acquired 11. They’re nearly in dead last while the Oregon Ducks are clearly running away with it in first place.

This is exactly what Oregon needed. Since the conference realignment, Ducks fans have been worried about what that means for the future. Although the Pac-12 has taken a hit, the Ducks will maintain relevancy with this dominant recruiting class. Meanwhile, USC and UCLA could find themselves struggling a bit, as their lack of acquiring top talent could prevent them from reaching success in the Big Ten.

Look for Oregon to continue reeling in the top recruits as they aim to continue being a major player in the college football world.