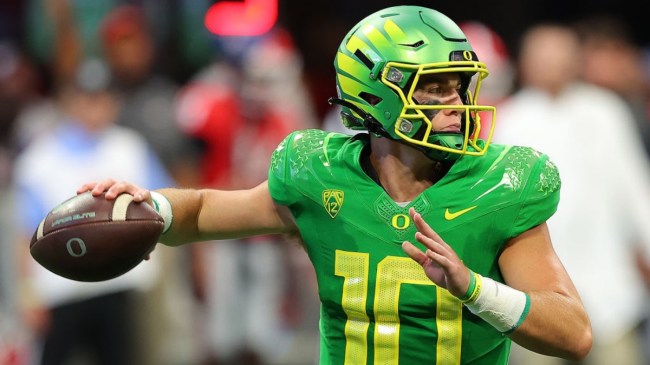 Today was a rough day for the Oregon Ducks.

They knew they’d have a tall task ahead of them when they went to Atlanta to take on the defending National Champion Georgia Bulldogs. They just likely didn’t realize exactly how tall of a task it was going to be.

To make matters worse, their new quarterback, Bo Nix, was terrible in his first game with the team. He competed just 21 of his 37 pass attempts and threw 2 interceptions without throwing a single touchdown.

The game likely carried an extra sting for head coach Dan Lanning, who left Georgia this year to take over as the head coach for the Ducks.

After watching his new team get demolished by his old team, Lanning was asked about his team’s quarterback. Despite the poor performance, the Oregon coach made it clear that he would be sticking with his quarterback.

Lanning says Bo Nix is a leader. He isn't moving away from him. He says the offense moved it well but didn't cap off drives.

"Bo is our quarterback."

The Ducks don’t really have many other options even if they were already preparing to move on from Nix after just the one game.

The team has very little experience at the position once they get past Nix.

Luckily for the Ducks, this should be the toughest matchup they face all year, but it just happened to be a challenge they had to deal with in their first game of the year.

Oregon should still be a contender in the PAC-12, but they’ll need Bo Nix to be a lot better than he was today.