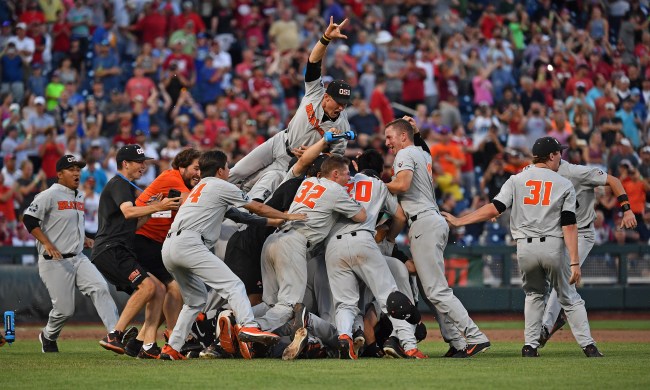 The Arkansas Razorbacks baseball team won’t be getting a good night sleep anytime soon after they let the first College World Series title in school history fall at their feet, literally and figuratively.

On Thursday, Oregon State celebrated their third NCAA baseball championship after shutting out Arkansas 5-0 to win the College World Series, thanks in large part to the right arm of freshman pitcher Kevin Abel. But before we get into the details, it should be noted that Arkansas was one out away from capturing the CWS the night before, when this happened.

As I stated, there will be many sleepless nights for the Razorbacks. I suggest NyQuil. Or weed.

If I were an Arkansas player/fan, I’d have to blame the loss on ESPN jinxing them by declaring Arkansas champions right before this choke job happened.

Uhhhhh I think I can explain what just went down in the #CWSFinal. Saw this right before Arkansas missed the foul pop up that would have won it for them. @espn has some explaining to do pic.twitter.com/ijebQuJAid

In any event, Oregon State made them pay the following night, when Kevin Abel threw a two-hit, complete game shutout, striking out 10 batters and retiring the final 20 batters he faced. His two-hits against is the fewest hits allowed in a CWS championship game. On the biggest stage in college baseball, the 19-year-old freshman was able to do something no pitcher had done all season against the Razorbacks: shut them out. Not bad for a guy who pitched three times in the past five days, throwing a total of 247 pitches.

Kevin Abel just authored the greatest pitching performance in the history of the College World Series. If you love baseball, and pitching, you had to be amazed. That was magnificent.

Teammates lift Kevin Abel onto their shoulders, and hand him the trophy – after he carried them on his shoulders today. A 2-hit shutout for the national title. Incredible. pic.twitter.com/veFwM57Dzq

Congrats to OSU, and heads up to the Arkansas Razorbacks. It will get better. Not by much, but a little.