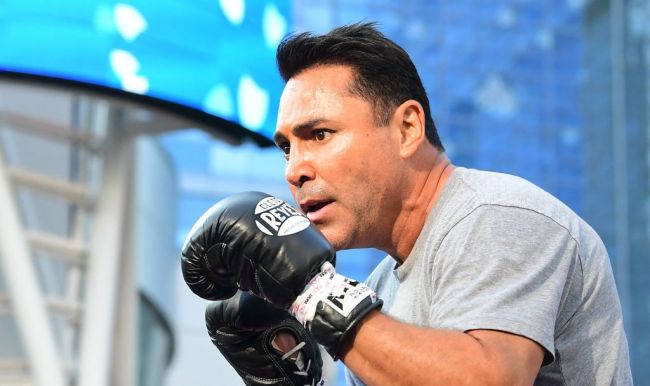 Oscar De La Hoya’s long-awaited return to the ring against former UFC champion Vitor Belfort has been derailed due to a medical emergency.

On Friday afternoon it was reported that De La Hoya contracted Covid-19 prior to the match and would be forced out of the bout that is scheduled to be held next Friday. Triller, who is promoting the event, is attempting to replace De La Hoya with 58-year-old former heavyweight boxing champion Evander Holyfield.

Source: Oscar De La Hoya has tested positive for COVID and he is out of his Sept. 11 fight with Vitor Belfort on Triller. Evander Holyfield is stepping in to fight Belfort. If California commission won’t approve Holyfield fight could move to another state

Triller is working on Vitor Belfort x Evander Holyfield for next week’s main event, per Triller’s Ryan Kavanagh. They are awaiting word from CSAC if Holyfield will be cleared. Kavanagh said if he doesn’t get cleared they are going to move the card to Florida. Same date, 9/11.

Oscar De La Hoya went on to post of video of himself in the hospital after news broke of his situation.

Wanted you to hear directly from me that despite being fully vaccinated, I have contracted Covid and am not going to be able to fight next weekend. Preparing for this comeback has been everything to me over the last months, & I want to thank everyone for their tremendous support. pic.twitter.com/0wKEnr5Jzv