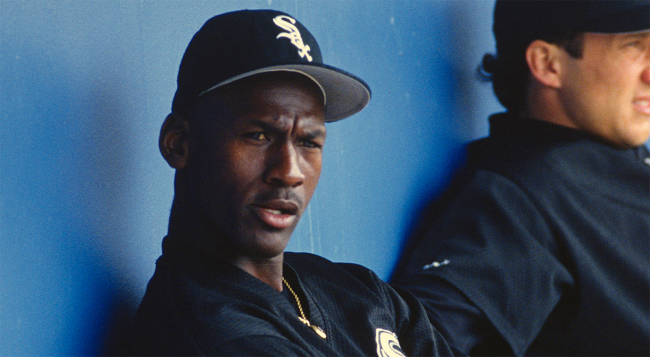 Back in 1994, the greatest basketball player in the world, Michael Jordan, decided that he wanted to become a baseball player.

So, with a little help from Chicago Bulls owner Jerry Reinsdorf (who also happened to own the Chicago White Sox), His Airness headed to Alabama and joined the Double-A Birmingham Barons.

While he obviously garnered almost all of the media attention at the time, he was still just a rookie and because of that he was treated that way, according to former White Sox shortstop Ozzie Guillen.

Guillen, who guided the White Sox to a World Series victory in 2005, now works as a White Sox studio analyst for NBC Sports Chicago.

During Sunday’s broadcast, Ozzie shared a hilarious story about that season with MJ.

“We were on the bus, and the bus, for some reason, ran out of beer,” Guillen begins his story. “And we’ve got to stop the bus … and I told Mike Cameron, Ray Durham and Michael Jordan … we stopped at like a gas station somewhere. I told the guy make sure you stop at a gas station and make those guys go up and get the beer.

“Michael went down with the guys got the beer… I wish we would have had a cellular phone back then… All the sudden, Michael Jordan walks up with the beers and threw them right in my lap, as if to say, ‘Here’s your beer!'”

Ozzie Guillen said Michael Jordan wanted to be treated like a rookie, so he was

Guillen’s co-host on the show then talked about how he liked that Ozzie so casually told Michael Jordan to go get him some beers.

“He’s a rookie!” Ozzie replied. “He was a superstar back on the basketball court. With the White Sox, I was a captain, I got Robin Ventura protecting me. He said, ‘Send ’em.'”

Guillen added with a chuckle, referring to Jordan, “We’re playing cards… and that’s the only guy who smoked cigars inside the bus.”

He said the entire bus smelled like a cigar because the bus windows were closed and, despite Jordan’s status as a rookie, “nobody said anything.”

Besides that, Guillen said it was fun because Michael just wanted to be treated like everyone else and said he’d never seen anybody work harder than Jordan.

He also warned that if Michael Jordan ever asks you to play pool, “say no.”

That time @OzzieGuillen made Michael Jordan buy him beer 😂

"He's a rookie. I was a captain!" pic.twitter.com/JHo9btIHdV