Pacers’ Alize Johnson, Who Wears #24, Explains Why He’s Not Going To Change His Number After Kobe Bryant’s Death 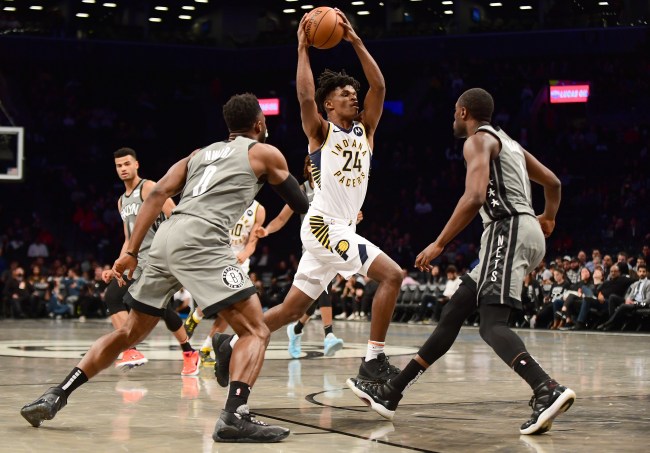 Kobe Bryant’s No. 8 and No. 24 isn’t officially retired league-wide in the NBA but several players are proactively changing their numbers as a tribute to Bryant.

Sources: Multiple NBA players have begun informally retiring Kobe Bryant’s jersey number(s) as a tribute — with Nets guard Spencer Dinwiddie among them, changing from No. 8 to No. 26.

The NBA typically makes players wait for a new season to start to allow players to change a jersey number but Dinwiddie has been granted permission to make the switch to No. 26, according to a source familiar with the decision

Despite the call from fans to retire Kobe’s number, Pacers’ Alize Johnson has decided that he will continue to wear #24.

Pacers forward Alize Johnson, who has always worn No. 24 for Kobe, is not changing his number, per source.

“You need that role model coming up and for me, it was God and him,” Johnson told @TheAthleticIND.https://t.co/S9NEVAtNhj pic.twitter.com/MDkT9mOyTA

Johnson says that Kobe was his idol and he will continue to wear #24 to honor him.

I wear 24 because Kobe was a role model growing up. I plan to continue to wear 24 as a tribute of the great respect I will always have for him. No one has asked me to change but if I’m asked I will without hesitation https://t.co/oY5Xo44zQA

The league still has not commented on if they are thinking about retiring Kobe’s number. As of now there are still 20 players who are wearing #8 or #24.

There are 20 more players in the league who currently wear No. 8 — after the Nets' Spencer Dinwiddie and Orlando's Terrence Ross gave theirs up today — and 12 players who wear No. 24, according to research by my friends at @bball_ref