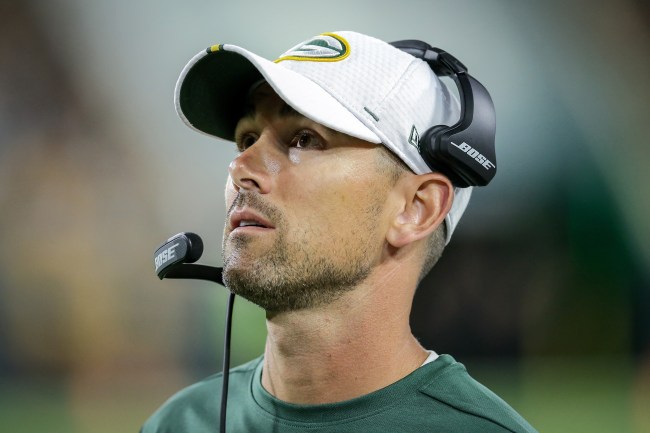 Back in June, LaFleur commented that he wanted to restrict Rodgers’ ability to change the play call on the field.

It totally comes with time,”. “You got a guy with that much experience that can see things—if he can get us into the perfect play, why wouldn’t you give him that freedom? The biggest thing, I’m hoping that we do a good enough job as a staff that he doesn’t have to do that, in terms of the play calls and setting us up and being in the right looks. That’s the goal, to take that off him, because I just want him to go play. But certainly, if there’s a play that’s not gonna be good, yeah, please, save us. That’d be great.”

Rodgers was a bit annoyed with LaFleur’s comments about his freedom to audible on the fly.

“It’s a conversation in progress,” R”I don’t think you want to ask me to turn off 11 years (of recognizing defenses). We have a number of check with mes and line-of-scrimmage stuff. It’s just the other stuff that really not many people in this league can do.

“That’s not like a humblebrag or anything; that’s just a fact. There aren’t many people that can do at the line of scrimmage what I’ve done over the years. I mean, obviously, Tommy (Brady) can do it, no doubt. Peyton (Manning) could do it. Drew (Brees) can do it. (Patrick) Mahomes will be able to do it. Ben (Roethlisberger) has called the two-minute for years. There are a few of us who’ve just done it; it’s kind of second nature. And that’s just the icing on the cake for what I can do in this offense.”

On Monday, LaFleur admitted that he would give Rodgers the “green light’ to audible whenever he wanted.

After a summer of angst over whether Aaron Rodgers will be allowed to change plays at the line, Matt LaFleur said this two days before the season opener: "Yeah absolutely. We’ve given him all the freedom, so if he sees something, he’s got the green… https://t.co/xhlqveVWGq

Today, LaFleur was asked again about the Aaron Rodgers audible situation and he was clearly fed up with the media for continuing to ask him about it.

You guys just will not stop with this audible thing. It’s unbelievable. What do you guys want me to say?” LaFluer said. “I think that we’ve always had adjustments within our plays. It’s just we called it something different. The fact that I didn’t call it an audible, everybody’s running wild with it, so it’s comical to me. I feel good with what we’ve got in our plan, how we’ve gotten to this point. And I’m confident that he’s got a total command and control of what we’re trying to get done.”

Hopefully, this is the last of this dumb audible drama