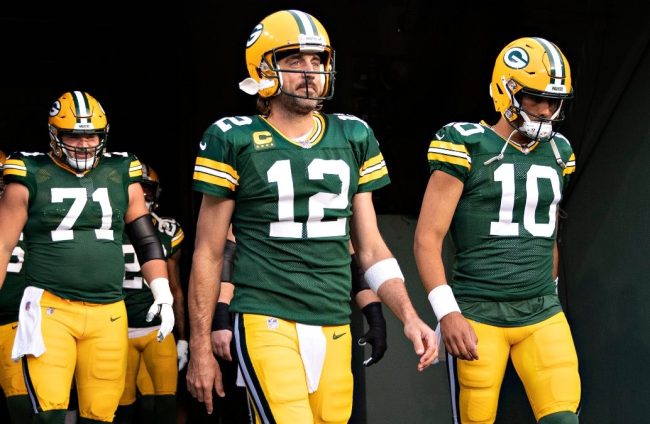 The Green Bay Packers held their first preseason game on August 12 against the San Francisco 49ers. Aaron Rodgers did not play, as he’s clearly the starting quarterback and doesn’t need to participate. However, it was an opportunity for Jordan Love to show what he’s got and he ultimately struggled. Rodgers attempted to build up the young quarterback but the fanbase just isn’t having it.

According to Ryan Wood, Aaron Rodgers “felt bad” watching Love’s preseason performance. However, he did try to find the positives in the game, even though Jordan Love threw three interceptions. It seemed like a nice endorsement, but it seems like Packers fans just aren’t believing it.

Aaron Rodgers said he "felt bad" for Jordan Love with so much he couldn't control going wrong around him Friday night in SF: "It might look bad on the stat sheet with three picks, but the film tells a very different story."

Anytime a quarterback throws three interceptions, the common opinion is that it was an awful game. Packers fans felt they saw right through Rodgers’ comments and began calling him out for it.

He’s just trying to up his trade value….smart

I mean the guy is quite literally insane, so grain of salt https://t.co/KCDzKHZMN6

You’re the entire reason he’s in this situation. Christ https://t.co/gdEHdHm3k3

As you can see Packers fans simply aren’t believing Aaron Rodgers. It’s been a bonkers time in Green Bay the last two years. Regardless, the fanbase will back Rodgers once he’s under center for the regular season opener. As for Jordan Love, there were definitely some positives to take away from his preseason game. However, throwing three interceptions is hard to ignore.

Maybe Love can bounce back with a strong performance when the Packers take on the New Orleans Saints in Friday’s preseason game. If he can do that, then perhaps the fans will support him once again. Until then, this is Aaron Rodgers’ show and he isn’t going anywhere for now.