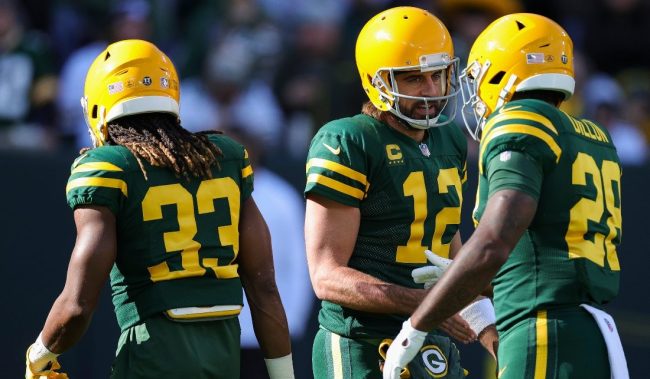 All eyes are on the Green Bay Packers right now as the franchise aims to remain at the top of the NFC North. The front office traded away Davante Adams in the offseason and didn’t do much to replace him. Many hope Christian Watson shines in his rookie year while Romeo Doubs has generated a ton of hype. However, the latest comments from Aaron Rodgers regarding Aaron Jones and AJ Dillon have Green Bay fans concerned about the offense.

Aaron Rodgers Has High Hopes For The Packers Backfield

On Tuesday, Rodgers was asked about the Packers’ offense and what he thinks about the backfield. Obviously Green Bay has a solid duo in Aaron Jones and AJ Dillon. They’ll likely be utilized often throughout the 2022 season. However, According to Zach Heilprin, Aaron Rodgers makes a bold claim about his running backs that has the fanbase asking questions.

Aaron Rodgers says he thinks 50 catches each for Aaron Jones and AJ Dillon this season is realistic. Said they need to get their best 11 on the field.

50 receptions for each running back is a lot. We’ve seen Jones perform well as a receiving option before. However, Dillon hasn’t shown much in the passing game whatsoever. Additionally, this is a bit alarming for the wide receiver group, as it sounds like Aaron Rodgers may prefer throwing to his running backs. Packers fans couldn’t help but react to this information.

Considering the state of the wide receiver room, it makes sense why Rodgers might prefer utilizing his running backs in the passing game. Regardless, the Packers fanbase can’t help but share their opinion on the offense.

Not exactly a vote of confidence in the receivers.

Makes you think what the level of volume Lazard and the other guys will receive is…. https://t.co/xaQrUZkSWE

Aka “…our WRs arent the best… temper expectations.” https://t.co/EFFug3XPKs

One of those was Aaron Jones who had 52.

We’ll see if Rodgers’ comments hold true. This could be a smokescreen altogether. Especially considering how well Romeo Doubs has been playing throughout the summer. Either way, the Packers’ offense is going to feature the run game. So, why not get the running backs involved in the passing game too?