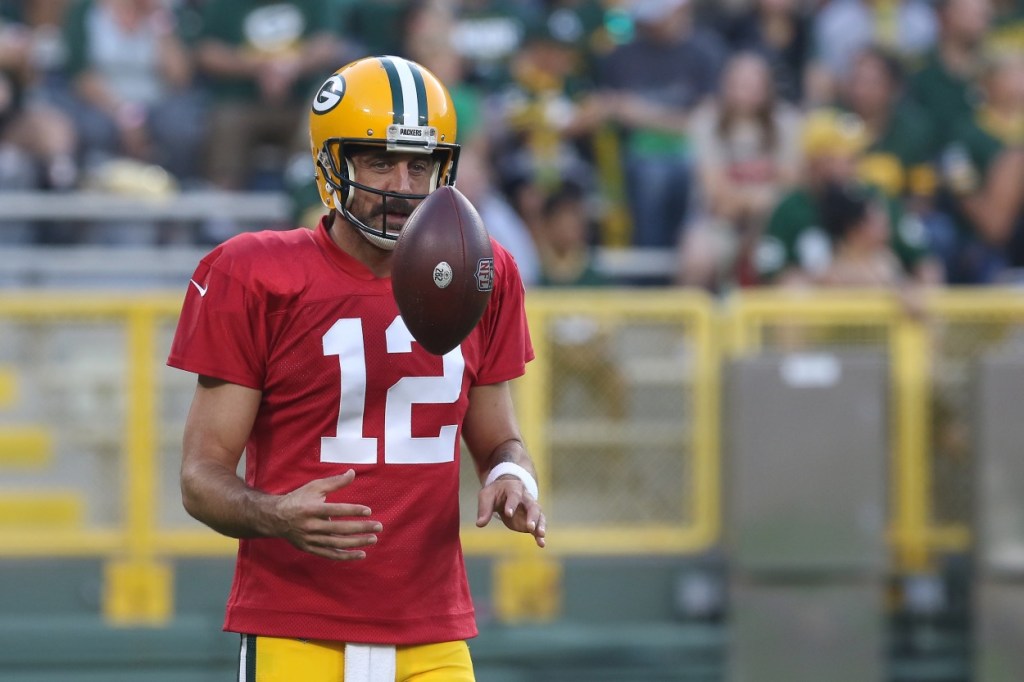 Green Bay Packers quarterback Aaron Rodgers is coming off back-to-back NFL MVP award-winning seasons. He’s now on a quest for the MVP threepeat. That’s a feat that hasn’t been done since his predecessor Brett Favre became the only NFL player to do it when he swept the MVP award from 1995 to 1997.

I won’t question the preparation or process of Aaron Rodgers. I’m not even on the same planet as Rodgers when it comes to playing football and understanding the game. The dude has more football talent in his pinky than I’ve got in my whole body. But this new footwork is puzzling.

I know that because I came across the clip on Twitter with a few elite quarterback trainers tagged. They engaged with the tweet and are baffled by what Aaron Rodgers is possibly doing here. It kind of looks like Aaron’s line dancing. That’s clearly not what is happening as he’s throwing balls at practice. But let’s check out Rodgers’ new footwork and try to dissect what’s happening.

Gotta ask my QB guys about this. @Greg_Panelli @QuincyAvery What is this lil kick step thing Rodgers does here? Not sure I’ve seen this. Quicker way to get the front foot down? pic.twitter.com/3YQVMSo453

That tweet was shared by former NFL/AFL player Eric Crocker. He tagged Greg Panelli of the Panelli Passing Academy and Quincy Avery who is an elite quarterback trainer that’s worked with NFL quarterbacks including Jalen Hurts and Deshaun Watson.

Here is what those elite quarterback trainers had to say about this new footwork from the reigning MVP.

I have no idea. Aaron an alien.

Tell all young QBs, don’t watch him. He does so many things that go against normal mechanics with his arm and base lol

Im gonna take a guess and say he kicked it out front like that to be able to brace himself for the “pop step” he did once he threw the ball. Aaron does it more frequent and better than anyone. Usually it’s done associated with some movement or pressure to stop the frontside from

flying open (both hips and shoulders) while being able to maintain more power behind the ball during an escape or pressured throw. But, on a basic drop like this, he could just be screwing off 🤷‍♂️ not quite sure lol

Interestingly, this isn’t the first time Aaron Rodgers has been seen doing this…

Little harder to see with the graphic in the way but he did it here too pic.twitter.com/eS3IOCfSlC

He doesn’t do this in games (though he does all kinds of weird stuff).

I’m thinking of some golf drills that are kind of like this where it’s about emphasizing driving off the back foot.

Like if the front foot is off the ground, you HAVE to get your weight transferred. 🤷🏻‍♂️🤷🏻‍♂️

Something akin to a drill that’s designed to trick you into doing/thinking a specific thing. That way the end result becomes part of your muscle memory even when you cut out the drill. But ultimately, it is a baffling drill that Aaron Rodgers is doing here.

It’s also worth noting that Rodgers doesn’t even need to be throwing balls in practice at this point. He’s good. The team’s good. They’ve got this machine:

For the Green Bay Packers, the future is now https://t.co/HW8oyM5su1