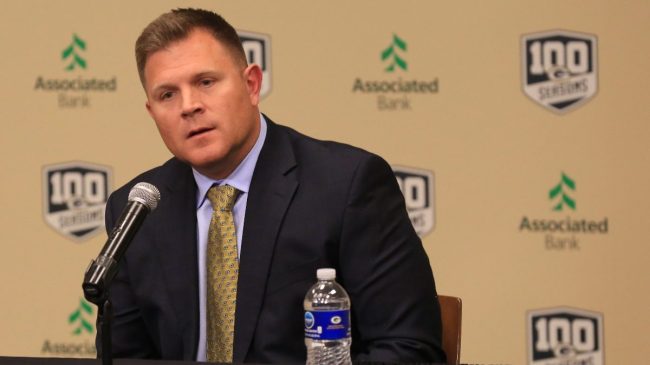 As multiple trades were finalized right before the deadline, all eyes were on the Green Bay Packers to make a move. It’s evident they need a wide receiver and they were rumored to be in the mix for a few. However, nothing transpired. Now, general manager Brian Gutekunst is completely ghosting the media, which has the fanbase heated.

While head coach Matt LaFleur talks with the media, Gutekunst is in hiding, per Matt Schneidman. The Packers’ head coach refuses to discuss anything about the trade deadline. At the end of the day, that’s not his concern, as those are questions for a general manager to answer.

Yep. Gutekunst not being made available, however. https://t.co/F0rArWEYWi

It’s not a great look for the Packers’ general manager to go missing right now. The fans were hopeful Green Bay would make a move to improve their chances of possibly winning the NFC North. Instead, the franchise stood idly by as the Chicago Bears and Minnesota Vikings added weapons to their arsenal. As you can imagine, the cheese heads are not happy.

Once again, a Packer GM leaving the Coach hanging out to dry.

A lot of Packers fans are feeling this way.

We are back to the McCarthy days. Front office afraid to front office.

It really is mind-boggling to think about how Green Bay has handled themselves over the last few years.

Maybe there’s a master plan to make big moves in the offseason? We’re not sure either. It’s just so weird to see the Packers not make a move at the trade deadline when this could be Aaron Rodgers’ final season in Green Bay. Keep an eye on Brian Gutekunst though, as he eventually has to speak with the media at some point.