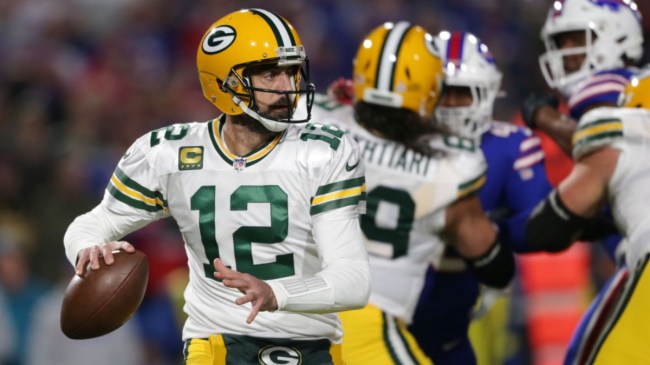 It’s become all too common of an occurrence for the Green Bay Packers in recent years. They get so close to making something special happen and then they fall short and every time it’s happened, they’ve responded the same way. They’ve responded by not getting Aaron Rodgers the help he needs on offense.

In 2019, they won 13 games in the regular season and made it to the NFC Championship Game only to lose to the 49ers by 17. Instead of trying to help a contending team win the next season, they responded by spending their first round pick on a quarterback they didn’t need and who is still a backup in his 3rd season.

In 2020, they won 13 more games in the regular, only to be felled by the Tampa bay Buccaneers in the NFC Championship Game. Instead of learning from the success of a Bucs team that surrounded Tom Brady with Rob Gronkowski, Mike Evans, Chris Godwin, and Antonio Brown, they focused on their defense.

Unfortunately, it wouldn’t change anything for them. Last season, Aaron Rodgers led them to a 3rd consecutive season with 13 wins and secured the top seed in the NFC. The team lost in the Divisional Round to the 49ers in a game where Rodgers clearly only trusted 2 pass catchers and the special teams let the whole team down.

During all of those seasons, the Packers never drafted a wide receiver higher than pick 85, directly leading to his lack of receivers he trusted. In fact, heading into the 2022 offseason, the Packers hadn’t drafted a receiver in the 1st 2 rounds since Davante Adams.

Then the Packers really decided to make life difficult for Rodgers. When Davante Adams decided he wanted to team back up with his college quarterback in Vegas, it left the Packers extremely thin at wide receiver and clearly without a WR1.

Instead of going out and getting Rodgers a replacement in free agency or even trying to get one of the receivers available in round 1 of the draft, the Packers waited until round 2 to take a receiver out of a small school who had impressive speed, but trouble with drops.

He hasn’t been the answer. Throughout the season, he has either been hurt in ineffective just about every week. He has even been surpassed by Romeo Doubs, who was drafted in the 4th round in April. The situation clearly hasn’t worked as the offense has struggled and the Packers have worked their way to a 3-5 schedule.

Despite the issues, the Packers had a chance at the trade deadline to remedy the situation and give Rodgers the help he needs at receiver. The best they did was offer a 2nd round pick for Chase Claypool.

As some others have reported, the #Packers were in the running for #Steelers WR Chase Claypool. They offered the same compensation as Chicago did, a source said. But the #Steelers thought Chicago's pick would be considerably higher even though both teams are 3-5.

The Packers once again failing to get Rodgers help at receiver is just the latest instance of the team failing to give their franchise QB what he needs. He asked repeatedly for help and stated his hopes that the team would do something. He has expressed his frustration with the group around him. Still, nothing.

It’s honestly incredible to watch the way they’ve squandered his career as he’s earned back-to-back MVPs, but didn’t have the firepower in the playoffs to win a Super Bowl.

Now Rodgers is once again left without the firepower to compete with the top teams in the league. This season it’s not even a guarantee they’re going to make the playoffs and the Packers front office has nobody to blame but themselves.