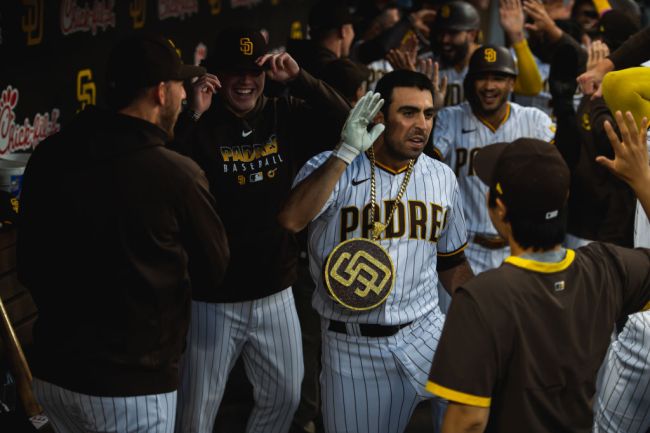 THE PADRES CAN NOT STOP HITTING GRAND SLAMS!

Slam Diego relief pitcher Daniel Camarena is a 28-year-old rookie and a San Diego native. He was called up from AAA ahead of Thursday’s game against the Nationals and did the unthinkable.

After starting pitcher Yu Darvish gave up six early runs, the team called on Camarena for mop-up duty. He came into the game in the top of the fourth inning and allowed two more runs to score, making it 8-0 in favor of the visitors.

San Diego decided to let him pitch into the fifth.

Taking a chance on Camarena.

Camarena was near the bottom of the upcoming lineup and it was unlikely that he would get to hit in the fourth.

Well, Fernando Tatís Jr. led off with a solo home run. And then — a few hit by pitches, a pair of strikeouts and a walk later — the bases were loaded with two outs.

For whatever reason, manager Jayce Tingler decided not to pinch-hit for his pitcher. Not only was it only Camarena’s second-ever plate appearance, but he had to face Max Scherzer.

After falling behind 1-2, what happened next was historic.

Camarena went down and got his bat on a 96mph pitch out of the zone. His first-career hit was a grand slam off of a five-time Cy Young winner.

This isn't just a grand slam.

And it isn't just a grand slam BY A PITCHER.

It's a grand slam, BY A PITCHER, FOR HIS FIRST CAREER HIT.#SlamDiego pic.twitter.com/goraKjGanH

It was way gone.

His family reacts to history.

Camarena’s family was in attendance and the shot of his dad going nuts is amazing. His bomb made it 8-6.

He became only the second pitcher in MLB history whose first hit was a grand slam. The first was Bill Duggleby in 1898.

“Oh my God, I blacked out,” Camarena said of his dinger. “I hit first base and then all of a sudden I noticed the lights were flashing in the stadium and that’s when it kind of hit, like, Oh my God I just hit a home run. Not only that, a grand slam.”

To make the night even more special, the Padres came back to win in walk-off fashion in the bottom of the ninth.

“Down 8-0 to Max Scherzer, our ace goes out of the game, we get a grand slam from a pitcher just called up today, probably at the top,” said Tingler. “It’s special and that’s why I’m confident we’re going to do special things, just because of the way we fight. We don’t lay down, we just keep going.”

How can you not be romantic about baseball?