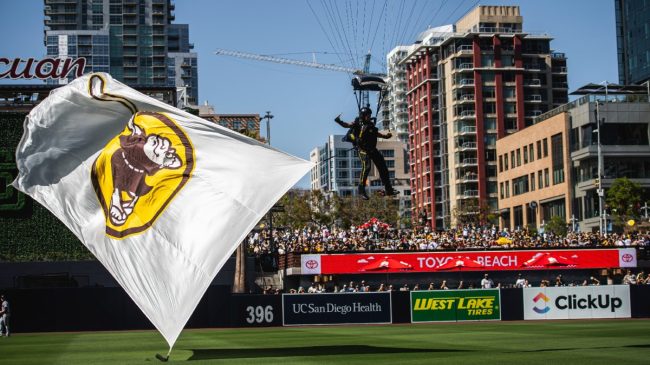 The San Diego Padres will sport a new look in the 2023 baseball season.

While the uniform look won’t change, there will be an extra addition on the sleeve. The Padres announced on Tuesday that the team will wear a Motorola logo on their jerseys next year, marking the first time that an MLB squad has rocked a team sponsor on the tops.

This is common practice for sports like soccer and NASCAR, as companies can purchase logo placements on jerseys as opposed to, say, the outfield wall.

It makes sense seeing as the cameras and the eyes of the viewers are constantly on the players, meaning more exposure for your brand. But that doesn’t mean everyone is happy about the change.

Major League Baseball is known for being slow to change. That includes both the league and a large portion of its fans.

Baseball is a sport with a long history, and folks aren’t typically excited to hear about adaptations to ‘America’s Pastime.’ Look no further than the reaction to replay, pitch clocks, and automatic walks.

So, when the news of the Motorola partnership with San Diego broke, many were expectedly upset.

MLB Fans React To Sponsorship Logos Being Worn On Jerseys

The Padres are the first domino to fall in what will likely become a trend in Major League Baseball. A number of fans took to social media to post their immediate reaction to the news.

Padres announce they will have Motorola patches on the sleeves of their jerseys starting next season. So it begins.

This is bad for baseball and sports in general

Thanks I hate it

Others had some fun with the introduction of the logo, as they likely know that it’s a trend that will continue throughout both the MLB and US sports.

I hope Seattle is sponsored by Blockbuster https://t.co/BLFLm0PXHN

Motorola? LOL. What was AskJeeves not available? https://t.co/DKMbEKQSKD

Patches make the baseball boomers/purists cry so I’m 100% here for it https://t.co/i3tqOoiinp

The Padres won’t be the last team to don a sponsorship logo on their jersey. But you can expect the same outrage as each additional team decides to follow the trend.