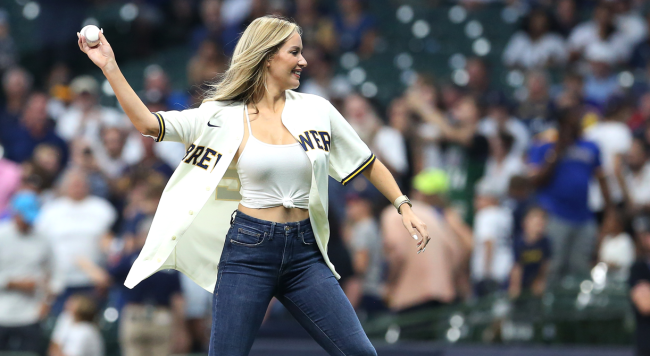 Pro golfer Bryson DeChambeau had fans cracking up after he was clotheslined by a gallery rope at the LIV golf event in Chicago over the weekend.

As the 29-year-old PGA pro attempted to duck under the rope, it caught him right in the face sending him to one knee with a exclamation of “What the f–k?!”

Yes, it was as great as it sounds.

Never one to miss out on a viral golfing moment, influencer Paige Spiranac weighed in on DeChambeau getting clobbered by a gallery rope with a hilarious take on the incident.

“As we know, golfers get the reputation of being soft, and Bryson DeChambeau proved everyone wrong.

“After a wayward, wayward drive, he was coming from the crowd back into the golf course at a staggering one mile per hour, the spectator rope came out of nowhere and almost decapitated him, blinded him, caught him in the face,” she continued. “He fell to the ground. ‘I can’t see! I can’t see!’ Everyone is wondering, ‘Is he okay? Is he going to get up? Can he get up? Can he see? Is he going to live?’

“You know what Bryson did? He said, ‘I’m gonna persevere. He got up, he finished his round and he proved that golfers are tough as nails. Thanks for being an inspiration, Bryson.”

Bryson is tough as nails pic.twitter.com/Ak1pvo9xam

Not only that, he finished in a tie for eighth place at the Chicago event. What a trooper.

Such a warrior! Can’t thank him enough for sacrificing further injury with his performance!

On Thursday, Paige hit a ceremonial first drive for X-Golf at American Family Field in Milwaukee.

Check out @PaigeSpiranac hitting ceremonial first drive at @xgolfamerica inside @Brewers @AmFamField She has a gorgeous… swing. pic.twitter.com/u9MdBiidBu

The ceremonial first drive has officially been hit over at X-Golf.

Tomorrow is opening day, be sure to check it out! pic.twitter.com/3hqZWVGMHy

On Friday, she threw out the first pitch before the Yankees and Brewers game.

She’ll be signing autographs for Brewers fans at X-Golf on the Club Level soon. Stop by to say, “Hi!” pic.twitter.com/ltVGEeEBIi

The Brewers ended up walking it off when Garrett Mitchell smacked a single up the middle, scoring Hunter Renfroe in the 9th inning of the game following her first pitch.