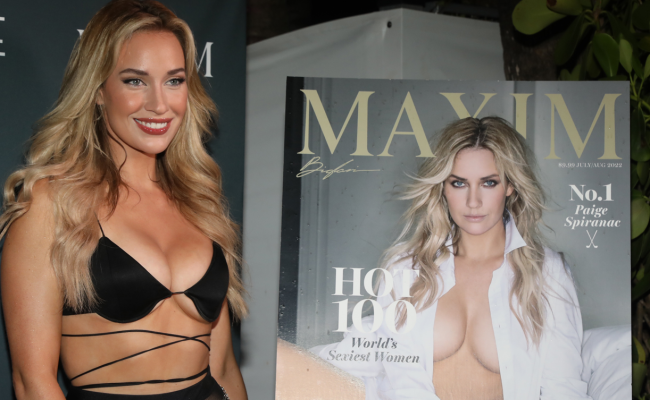 If you think making money hand over fist for producing and posting short videos and sharing pictures on social media with millions of people isn’t tough on the psyche, popular golf influencer Paige Spiranac is here to set you straight.

The Maxim Hot 100 cover girl expressed how tough it can be this week in an Instagram Q&A where she revealed she has imposter syndrome.

When a fan asked Spiranac how she keeps herself mentally grounded despite all of her fame, she replied, “This question is funny because it’s actually such the opposite where I have people in my life trying to build me up and make me more confident because I have self-confidence issues and imposter syndrome.

“And so all of this that I do is actually quite hard for me because I have no confidence and I’m always doubting myself or talking down on myself, so everyone’s like, ‘stop doing that,'” she continued.

“So it’s very much the opposite. I keep myself very grounded and I think sometimes I actually need to build myself up more and do the opposite because I’m my toughest critic and again, that imposter syndrome is real.”

Despite all of that, Paige Spiranac says she’s had a pretty good year.

“Life has been actually pretty good. Thank you for asking,” she told her fans. “Professionally, personally everything seems to finally be in order. I have done so much work in therapy to be be happy and feel fulfilled in life. And professionally I’ve been working my butt off and this is the best year I’ve had yet, which is exciting.

“But I think 2023 is going to be even better in all aspects of my life and I just feel really lucky and I want to thank you guys for always supporting and following along. I’m going on vacation soon.”

Spiranac also, in keeping with some recent themes of her posts, posted another photo on Instagram showing off one of her many “golf girl” outfits.

She also, much like she did when she recently asked her fans which sporting event is their favorite, asked who their all time favorite athlete is in the caption of the photo.