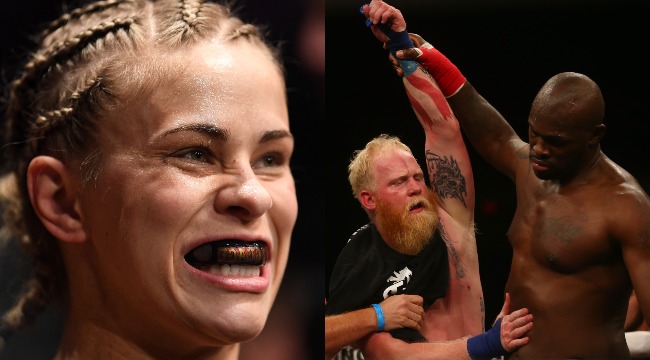 I’ve never jumped out of a plane before or put my life savings on red but I did just emerge from a 45-minute Bare Knuckle Fighting YouTube rabbit hole and this must be what Queen felt like after playing Live Aid.

Now I see why Shaquille O’Neal called the Bare Knuckle Fighting Championship “the future of combat sports” when he attended BKFC15 in December, and why former MMA stars like Chris “The Crippler” Leben and Paige VanZant gush about the three-year-old promotion like they can already see into the bright future.

In the lead-up to Knucklemania—the biggest BKFC event in history, available on both PPV and FITE.TV Friday, February 5—we spoke with newly-minted bare knuckle fighter Paige VanZant about why her new sport has no ceiling.

.@PaigeVanZant tells us about her decision to join @bareknucklefc & debunks the misconception of #bareknuckleboxing being misrepresented as more dangerous than MMA during Episode 26 of #EndlessHustle.

“I have so much respect for [BKFC founder] Dave Feldman and what he’s doing with BKFC. Honestly, they’re growing astronomically. They’re really putting a lot behind what they do.

Once you go to a Bare Knuckle fight, it is like nothing you’ve ever been to. Every single fight is a sprint from bell to bell. They’re five two minute rounds, so you have a short period of time in each round to really make your mark and win the round. So it’s insane. The excitement behind each fight is crazy.

This sport is going to take off because every fight is one to remember. I truly believe that when people tune in and watch these fights they’re going to be like, ‘Holy cow, this is exciting!’

It does feel like the gladiator back in the day, just two people fighting. It’s exciting. It’s just a cool thing to be a part of.”

For the visual learners out there, lets start with an appetizer…

Have the boys over.

DO THE RIGHT THING: ORDER NOW