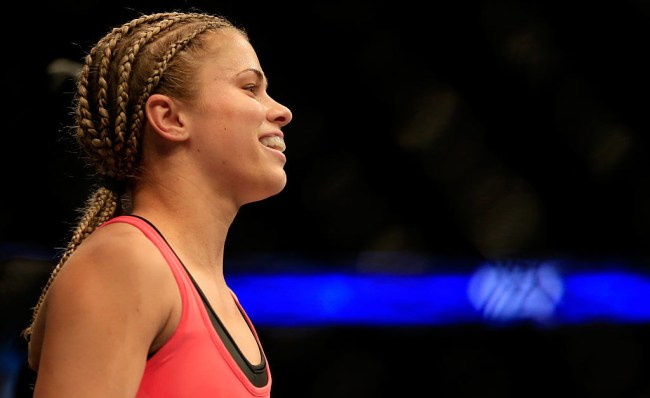 Cutting weight is one of the most barbaric things that happen in the world of combat sports. Hard to believe considering what goes on inside the ring or the octagon, but it’s true.

For evidence of that you need look no further than a couple of photos that 23-year-old rising UFC star Paige VanZant shared to social media on Wednesday.

The last time VanZant fought she had to go all the way from 137 pounds to 115 pounds just to make weight for her fight against Michelle Waterson in the UFC’s strawweight division – a fight she lost in the first round by rear-naked choke.

This drastic weight cut for the fight caused VanZant to pass out multiple times and, according to MMA Fighting, she said “that someone found her passed out on the bathroom floor and had to call her coach and mentor Urijah Faber to come ‘save’ her.”

In an interview on The MMA Hour, VanZant also had this to say…

“I’m a lot heavier than people realize. I was honestly killing myself for this sport. In my last I want to say two fights or three fights, I’ve passed out in my bathroom. This last one, I passed out and had the doctors almost not cleared me for the fight.”

. @PaigeVanzantUFC sharing photos of her brutal cut to 115. Glad she's now at 125. Can we do something about weight-cutting in #MMA yet tho? pic.twitter.com/10EvOXmfkE

Thankfully, as she referred to in her caption, the UFC has now created a 125 pound flyweight division so fighters like VanZant won’t have to suffer so much just to compete.

“I think that the world will see that I’m so much better at 125,” VanZant said on The MMA Hour. “I’m gonna be healthier, I’m gonna be stronger, i’m gonna be faster. I can’t wait to show that off.”