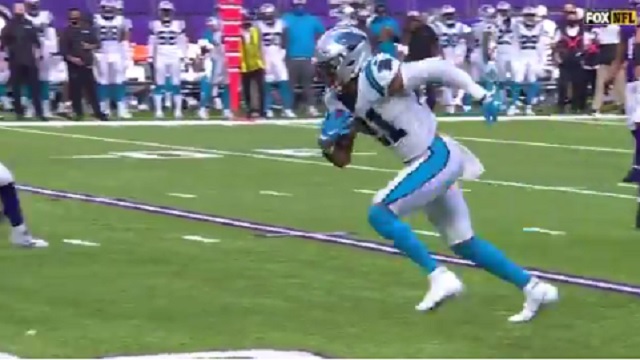 Carolina Panthers rookie Jeremy Chinn is having a career day.

Early in the third quarter Panthers-Vikings game, Chinn was able to score after Vikings QB Kirk Cousins lost the ball when he was strip-sacked.

Panthers stunt Thompson and Kerr, which allows Kerr to get a free hit on Cousins. Chinn returns the fumble to the house pic.twitter.com/o6Iq28X2xZ

About a minute later Chinn was able to score again when Vikings running back Dalvin Cook lost the ball.

Jeremy Chinn just strips Dalvin Cook and takes it back for his 2nd TD on back to back plays lol pic.twitter.com/A9IuiI88l1

Chinn was able to set a team record with the play, but it’s unclear if he made NFL history.

Jeremy Chinn becomes the first Panther to score 2 defensive TDs in the same game. Ever.