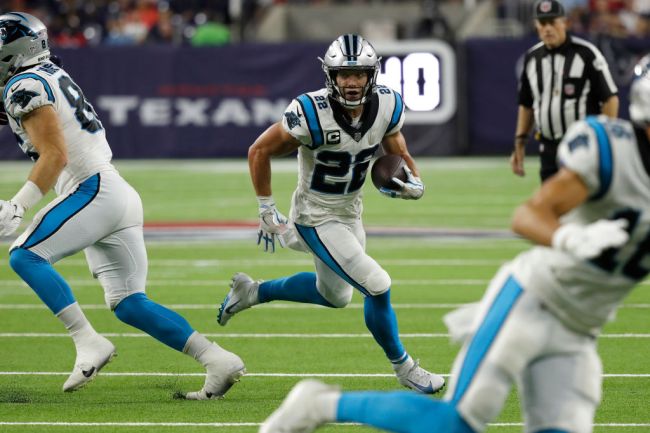 Carolina Panthers star running back Christian McCaffrey is going to miss some time after getting injured which is bad news for people who drafted him on their fantasy teams.

On Thursday night against the Texans, McCaffrey appeared to pull his hamstring during a running play.

Christian McCaffrey has been ruled OUT for the rest of #TNF with a hamstring injury, per FOX #KeepPounding pic.twitter.com/ScfHUjMUSO

According to NFL network insider Ian Rapoport, McCaffrey is set to miss the next few weeks due to the injury.

#Panthers star RB Christian McCaffrey is expected to miss a few weeks, sources say, as the team continues to run tests on his hamstring injury suffered last night. IR is not the plan as of now. Rookie Chuba Hubbard is the next man up.

Fantasy football owners who have Christian McAffrey on their team aren’t taking the news of his absence very well.

I am never drafting Christian McCaffrey again with the first pick in fantasy.

me, the guy who bragged about a fantasy running backs room of mccaffrey/jacobs/mostert going into week 3 pic.twitter.com/vIFhlHCrsQ

RIP to my fantasy team. Clowned myself drafting this man in the first round in consecutive years. https://t.co/R2bczrwU35

Here’s another example of why you don’t draft running backs high or give them ridiculous contracts. #NFL #KeepPounding https://t.co/vCuBryRuYq

Well my fantasy team is done for https://t.co/jnC6nQejTD