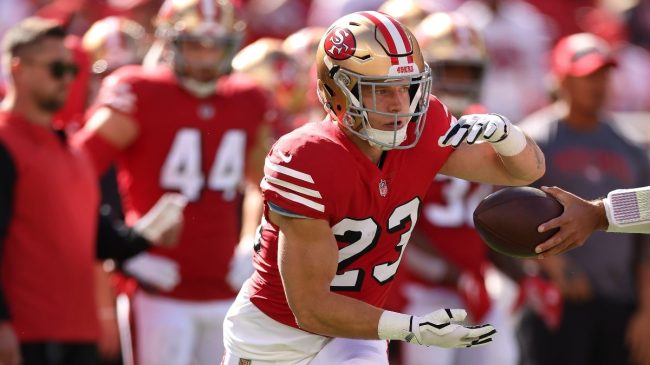 The Carolina Panthers rocked the NFL world after sending Christian McCaffrey to the San Francisco 49ers via trade. They received a nice haul of draft picks, which should help the front office build a more well-rounded roster for the future. However, details have emerged of the other offers Carolina received for their former superstar running back.

Panthers Turned Down Some Wild Trades For Christian McCaffrey

According to Dov Kleiman, there were multiple teams inquiring about McCaffrey. It sounds like the Philadelphia Eagles, Denver Broncos, Buffalo Bills, and Los Angeles Rams were all involved in a potential deal for the superstar running back. The Panthers eventually accepted an offer from the 49ers, but you should see what other teams were offering.

Update: #Eagles and #Broncos were also among the teams that were in on the Christian McCaffrey trade before he was dealt to the 49ers, according to SI

They only offered a 3rd or a 4th. Not nearly what San Francisco ended up paying

We already know the #Bills/#Rams were on it too

The Eagles and Broncos only offered third and fourth-round picks for Christian McCaffrey. It makes sense why neither of them was a favorite in landing the stud running back. Regardless, the Rams’ offer has caught some attention on social media.

Update 2: The #Rams offered to trade RB Cam Akers to the #Panthers for RB Christian McCaffery.

The Panthers took the #49ers offer instead.

It turns out the Panthers declined a trade from Los Angeles that was kind of similar to the 49ers. However, the key difference is that the Rams offered Cam Akers. Carolina surprisingly turned that deal down and went with San Francisco’s offer instead.

Some are of the belief that the Rams had a much better offer than the 49ers. Even so, the Panthers seemed to disagree. Considering Akers hasn’t looked sharp during his tenure with Los Angeles, perhaps Carolina wanted to avoid him altogether. Either way, they received a decent-sized haul for McCaffrey.