Panthers’ Vernon Butler Ejected From Game For Punching Jack Doyle In The Face, Flips Off Fans On His Way Out 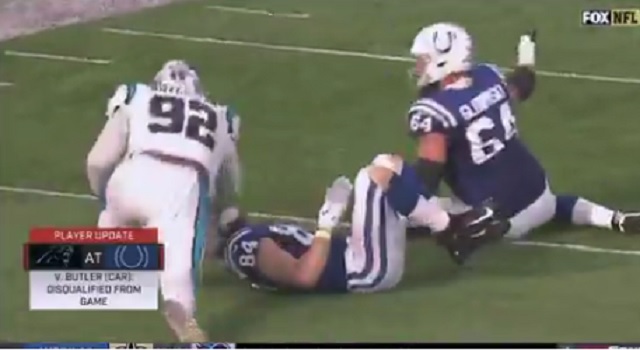 Carolina Panthers’ defensive end Vernon Butler can expect his wallet be lighter this week after the NFL fines him for his actions during this Sunday’s Panthers-Colts game.

Watch as Butler punches Colts tight end Jack Doyle in the face after pulling another Colts defender by the facemask.

Panthers DT Vernon Butler with the personal roughness penalty. Pulls down Mark Glowinski way after the play, who collides into Jack Doyle and sends both players to the ground.

Butler then punches Doyle in the head. They are reviewing this for a possible ejection, I believe.

Butler then flipped off fans as he exited the game.

Vernon Butler missed practice all week with an illness and just was ejected from the game for throwing a punch. Long, long walk to the locker room for him and he clapped toward some fans who were booing him on the way out. He also gave them the finger.