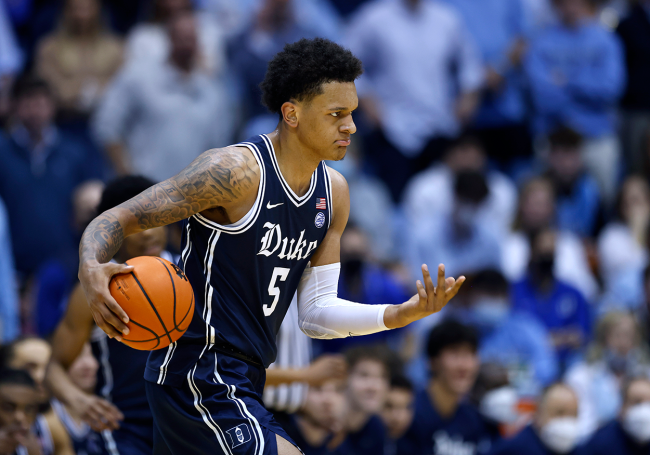 When NBA 2K22 releases its newest multiplayer season on Friday, Duke basketball star Paolo Banchero will make history. It will mark the first time that an active college athlete has appeared in an American sports video game since 2013.

Back in July, the NCAA passed new legislation that allows college athletes to make money through their NIL without forfeiting their eligibility. Prior to 2013, NCAA video games included college athletes who were not compensated without their permission.

It sparked a larger conversation about college athletes being allowed to make money that has since led to the current rules on NIL. Since then, there has not been a new NCAA video game.

Banchero, who is projected by many to be the No. 1 overall pick in the upcoming NBA Draft, signed a deal with 2K Sports in early September. He is set to see it roll out on Friday.

The 6-foot-10 forward will be featured in Season 5: Power Within. Banchero will star alongside Rui Hachimura and Kevin Durant on an “anime-style” journey.

Here is how it is described by 2K:

Can you feel it? Beneath the surface, a legendary power lies dormant, waiting to be unleashed. As a new day dawns with the arrival of Season 5: Power Within, victory and a trove of rewards await you, and the road to Level 40 will be filled with adventure. On your quest, you’ll need to search deep within and awaken a power only few possess. Become the hero the City and the Cancha Del Mar deserve, and reach your full potential as a Legend. Gain inspiration from two-time champion Kevin Durant, 2019 first-round pick Rui Hachimura, and if the prophecy is true, future NBA superstar Paolo Banchero.

Throughout your journey, you’ll see new sights around the world and have the chance to push yourself in all-new events. If you successfully complete your mission of reaching Level 40, you’ll feel an overwhelming sense of accomplishment, but more importantly, you’ll earn ani-mazing apparel, a futuristic hoverboard, and a colorful Grand Prize. This is just a taste of what lies in store for you—ready to get started?

Banchero, in turn, will make history.

After almost 10 years of video games without a single college athlete, the Duke star will be the first to step back into the space. It’s a very big deal.