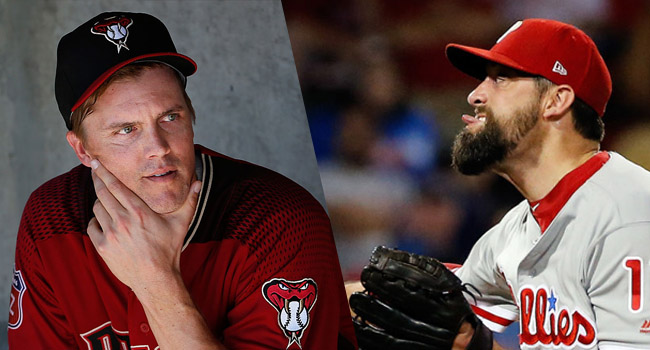 Colorado Rockies reliever Pat Neshek is one of those Major League Baseball players who likes to collect other players’ autographs and other memorabilia. He has a pretty impressive collection and is always trying to add to it while the getting is good and he’s still hanging around the other stars in the big leagues.

Back in July, while representing the Phillies at the MLB All-Star Game, Neshek said that his number one target was going to be Diamondbacks pitcher Zach Greinke, a guy who Neshek admitted doesn’t sign many autographs.

Welp, that didn’t happen, but according to Neshek, Greinke said he would do it for him later in the season. Unfortunately for Neshek, it again didn’t happen as he claimed Greinke had “stiffed me once again.”

So, since this is 2017, Neshek decided to air his grievances on the internet, the SportsCollectors.net message board to be exact…

“Thanks guys. Greinke stiffed me once again. I asked him at the all star game if he would sign for me and he said he would… so a couple weeks ago we played them and I sent over the cards I needed signed… basically 3 league leaders cards with Kershaw and Wainwright already done and 2 from 2015 to complete the set. He said no… I waited around for him during batting practice and went up to him and he totally denied having the conversation at the all star game… I then asked why this was a problem and he said it’s because “I wear him out.” Hard to wear someone out when he has never signed for me. This is the only ahole in major league baseball that has been a turd to me. So going back to the conversation I said can you just get these done it will take 5 seconds… just draw a little z on them for me… He said no I will never sign for you… I walked away… a couple minutes later I confronted him in the outfield while he was jogging and told him what I thought of him… he just kept on running then said I wouldn’t even sign for your kid if he asked…. I wanted to laugh knowing he had probably thought of that line for a long time and that was the best he could come up with… I then let him know what I thought of him again and being the socially awkward guy he is ran back to the dugout and went inside. Soooo I’m done with this guy. I’m basically gonna have to trade with someone on here to 50/50 them down the road.”

Ouch, tell us how you really feel, Pat.

Petty celebrity beefs are the best, aren’t they? Here’s to hoping that the Rockies and Diamondbacks meet in the National League Wild Card game.